By
Marie-Helene Carleton and
Micah Garen

Stockholm, Sweden – As Eze sat in the pew at a church where he goes most mornings to pray, his phone buzzed with a new message. His Icelandic teacher was checking in on him, giving him support.

A calm and composed man, Eze began to cry, the emotion intensifying as he continued to read. His friends in Iceland were standing with him, the message said, they would fight for him.

Eze Okafor, 32, had been living in Iceland for the last four years, working as a cook in a local restaurant, learning the Icelandic language, building a community.

“Iceland is my home now. I have contributed to the society here. Many people know me. My friends have become my family,” he told Al Jazeera.

Eze fled Nigera after being targeted by Boko Haram. In 2010, he and his younger brother, Okwy, were attacked in retaliation for not joining the armed group. “They tried to recruit me, but I refused.”

Members of Boko Haram stormed their house in Maiduguri, Borno State, in northeastern Nigeria. Eze was stabbed in the head and face. Okwy was killed.

Soon after, Eze fled Nigeria and made a long and dangerous boat journey to Europe, where in 2011 he sought asylum in Sweden. He told his story and showed his still fresh and infected wounds, including the gash over his eye, which he feared would cost him his eyesight. He was denied asylum and made his way to Iceland.

He applied for asylum in Iceland in 2012 but was denied.

He has been working with a lawyer, Katrin Theodorsdottir, who then applied for permission for Eze to stay in Iceland on humanitarian grounds, as his case has slowly made its way through the system. Eze said that in October he was given temporary residency and could work.

His case in Iceland has hinged on what time limit is relevant to his asylum request, as defined by Article 19 of the Dublin Regulation, which determines which European Union member state is responsible for asylum seekers.

Article 19 lays out a timeframe of six months within which an asylum seeker must be sent back to the country where they were originally asking for asylum, otherwise the current country is responsible for processing their asylum case.

After many rejections, appeals and back and forths between various immigration authorities, Theodorsdottir said there was a “twist”. A special immigration committee reviewing Eze’s case said the time limit to send Eze back to Sweden might have expired, and advised him to go to the immigration office and have his application for asylum processed.

“The police said I should come to sign and all of a sudden they took me into custody. They arrested me. I spent the night in jail,” Eze recalled.

“They next morning they said they were deporting me. I said I should go and get my stuff from my house. They said no. They took me to the airport and manhandled me.

“In Iceland, I have been integrated into society, with so many friends. A lot of people know me. So when the police was beating me, when I was arrested, there was a lot of reaction.”

Early on May 26, Eze was put handcuffed on to a plane for deportation. Two members of the rights group No Borders Iceland boarded the plane and stood up in protest, asking other passengers to stand up as well to protest at Eze’s deportation. After about 10 minutes, they were arrested by Icelandic police.

Eze was taken to Stockholm. At the airport, he thought the Icelandic authorities would give him back the only ID he had – his Nigerian driver’s licence. They took it back to Iceland. He was handed papers by the Swedish immigration authorities, which gave him until June 1 to leave Sweden or be deported back to Nigeria.

He was also given a piece of paper saying that he had no right to financial assistance. Without money or any identification, he was turned out on to the street where he spent the first night.

Boko Haram is an continuing threat in Nigeria with members and supporters at all levels of government and the police, Ezer said. Several years ago, members of Boko Haram kidnapped his mother in what he said was a bid to force him to return to Nigeria. After brutalising her – including an attack to her face that compromised her eyesight – the kidnappers demanded a ransom.

“What I am facing in Nigeria is that this Islamic group is after my life. My life is in danger.”

He said he believes that when he lands at the airport in Nigeria he fears he will be apprehended by the police. “Boko Haram has a network. They have been looking for me since then.”

Today, Eze is uncertain about his future. He does know one thing for sure. If he were to return to Nigeria, he believes it would mean death for him.

With his friends, he is working hard to find a lawyer who can take his case in Sweden. His dream is to return to his home in Iceland.

Theodorsdottir said there is something the immigration office could do. She has requested that he be granted permission to live in Iceland on humanitarian grounds, a request that is still pending.

Eze said his mother, Celina, taught him how to cook at an early age and it is his passion. He loved working in the restaurant in Iceland and had a good relationship with his boss. He loves to cook Nigerian food. Maybe, he said, once he is back in Iceland, and his life has found balance again, he could pursue a dream. There is no Nigerian restaurant in Iceland.

“Maybe one day, when I am back in Iceland, I could open a restaurant”, Eze said, smiling.

“When I was in handcuffs on my way to Sweden, I was pleading with them,” Eze said. “I am not a criminal. I did not commit any crime. I am asking for refuge. They should treat me like a human.” 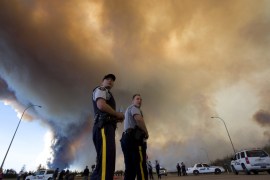 Tens of thousands of people were evacuated and housed in makeshift shelters as firefighters battle the blaze.