Correction19 Jun 2016
A previous version of this article briefly carried a headline saying that Morsi was among those sentenced to death. Morsi in fact received two lengthy prison terms.

An Egyptian court has handed down its final ruling in the trial of 11 people, including toppled president Mohamed Morsi and Al Jazeera journalists accused of leaking state secrets to Qatar.

The court on Saturday confirmed a ruling from May 7, when six of the defendants were sentenced to death.

After that initial verdict, the Cairo court had to seek the advice of Egypt’s Grand Mufti Shawqi Allam, the highest religious leader in the country, to be able to finalise the verdicts.

Egyptian law requires the mufti to sign off on death sentences. His opinion is not binding but usually respected by courts.

Morsi, the case’s leading defendant, and two of his aides were sentenced to 25 years in prison for espionage (in Egypt a life sentence is equivalent to at least 25 years.

Morsi is already facing the death penalty on other charges.

Morsi and his secretary, Amin el-Sirafy, each received an additional 15-year sentence for a lesser crime. El-Sirafy’s daughter, Karima, was also sentenced to 15 years in prison.

Those sentenced to death include Ibrahim Helal, former director of news at Al Jazeera’s Arabic channel. He is not in Egypt and was tried in absentia.

Helal was accused of passing state secrets to Qatar in what human rights groups have dismissed as a politicised case and a sham trial.

Helal said he was “angered” by the verdict and that the entire judicial process was “fabricated”.

“What really annoyed me today was the intensive talk and the self-assurances given by the judge and how he was sure these people betrayed the nation,” he continued.

“For me. the real betrayal of this nation is wasting its time and money in these silly things and fabricated cases.

“If you read the evidence, the only two kinds of evidence they have are the secret investigations of the police which was disclosed, and the confessions of others who gave statements under interrogation and torture.

“This is a political case … They want to threaten all journalists inside and outside of Egypt.”

Alaa Sablan, who was an Al Jazeera employee until last year, as well as Asmaa Alkhatib, a journalist with the Rassd News Network, were also sentenced to death in absentia.

The rulings can be appealed against in Egypt’s Court of Cassation.

Qatar denounced the verdicts, saying they set a dangerous precedent in relations between Arab nations.

“The verdict issued by the Cairo Criminal Court is baseless and goes against justice and the realities on the ground, because it includes a litany of misleading claims that contradicts the policy of the State of Qatar towards all its sisterly nations,” the foreign ministry said.

Steven Ellis, director of advocacy and communications for the Vienna-based International Press Institute, told Al Jazeera he was “disappointed” with the verdict but not entirely surprised “given the climate towards press freedom in Egypt.

“We are extremely disappointed to hear this verdict and hope that Interpol and foreign governments, in the event that a warrant for extradition is issued, do not honour those warrants because this was a sham case that was politically motivated,” he said.

“There was extremely thin if any evidence tying these journalists to the alleged crimes that happened.”

Since Al Jazeera began reporting on the anti-government protests that erupted in January 2011, the network has found itself being consistently and deliberately targeted by the Egyptian authorities.

Its offices were forced to close and several of its journalists were briefly detained that year.

In early 2013, one of its studios overlooking Tahrir Square was firebombed as police officers looked on.

Then, in July of the same year, just hours after the military removed the country’s first democratically elected president in a coup, soldiers stormed Al Jazeera Arabic’s offices in Cairo during a live broadcast, forcing the channel to go off air.

By the end of 2013, five Al Jazeera staff were behind bars, imprisoned for the sole reason of being journalists.

Although an international campaign managed to secure their freedom, there are more than 70 other journalists still in prison.

Al Jazeera continues to reject any accusations that it has in any way compromised its journalistic integrity, and that it was collaborating with Morsi’s elected government.

OPINION: Morsi’s punishment is a crime

Muslim Brotherhood-backed Morsi was overthrown by the military in July 2013 after mass protests a year after he took office. 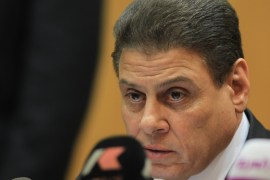 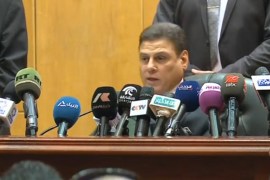 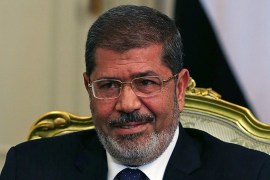 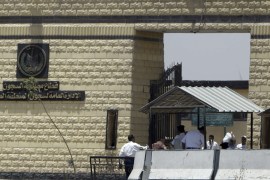