Named on Saturday as Samir C, Moustapha B and Jawad B, the trio were among 12 people arrested during the overnight raids.

The suspects, all Belgian nationals, were also charged with “participation in the activities of a terrorist group”.

Nine other detainees were released after questioning, prosecutors said.

Flemish public broadcaster VTM said earlier on Saturday that those arrested were suspected of planning an attack in Brussels this weekend during one of Belgium’s matches in the Euro 2016 football tournament.

Police targeted about 40 locations in a case that needed “immediate intervention”, the prosecutors said.

The raids took place in 16 communes in Brussels, Flanders and Wallonia and “passed off without incident”, the statement said.

European countries are on high alert as the Euro 2016 football tournament is under way in France.

Al Jazeera’s Nadim Baba, reporting from Paris, said: “People in Belgium and France are extremely aware that there is an ongoing threat.

“The French police have been very stretched, dealing not only with security around match venues but also with hooliganism.”

France has deployed 90,000 security forces for the tournament, but French President Francois Hollande has said that the threat of attacks will not stop the event from being successful.

In March, Brussels’ Zaventem airport and the Maelbeek metro station were attacked, leaving 31 people dead, including the bombers, and wounding at least 270 in the worst such incident in Belgian history.

The Islamic State of Iraq and the Levant (ISIL, also known as ISIS) group said it was responsible for the bombings.

The group also claimed responsibility for coordinated attacks in Paris in November which killed 130 people. 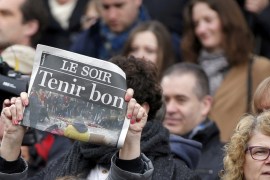 Belgium on high alert following the killing of dozens of people in Brussels bombings.