A teenager has died in police custody in Bangladesh just days after he and two others allegedly wounded a mathematics teacher from the country’s Hindu minority during an attempt to hack him to death.

Golam Faizullah Fahim, 19, was suspected of being a member of the Hizb ut-Tahrir (Party of Liberation), an international group which wants to combine all Muslim countries in a unitary Islamic state.

The group is outlawed in several countries, including Bangladesh.

Six suspected “Islamist militants”, including Fahim, have been shot dead in police custody since the start of a crackdown in response to a wave of violence against atheist bloggers, liberal academics, gay-rights campaigners, foreign aid workers, and members of minority religious groups.

READ MORE: Upfront – Does Bangladesh have an ISIL problem?

Police said Fahim who was in custody for questioning, was killed when officers came under attack in a farmland area on Saturday, after taking him to a river in search of his associates.

Fahim revealed the location of a Hizb ut-Tahrir hideout during interrogation and police took him with them to raid the location, Sarwar Hossain, police chief of Madaripur, where the shooting took place, told local news website Bdnews24.

“Hizbut operatives opened fire in an attempt to snatch Fahim, forcing the police to retaliate,” he said. “Fahim was caught in the crossfire.”

Local media said Fahim was handcuffed and had a bullet injury on the left side of the chest when he was brought to the Madaripur Sadar Hospital after Saturday’s shoot-out.

Locals in Madaripur, in central Bangladesh, caught Fahim on Wednesday after he and two others allegedly wounded Ripon Chakrabarti, the Hindu teacher, with sharp weapons.

Chakrabarty, 50, who received head and hand injuries during the attack, is now out of danger, doctors say.

More than 30 people have been killed in a wave of attacks since early last year, with atheist bloggers, liberal academics, gay-rights campaigners, foreign aid workers, and members of minority religious groups among the victims.

The Islamic State of Iraq and the Levant (ISIL, also known as ISIS) group has claimed responsibility for 21 of the attacks since its first claim in September last year and al-Qaeda has claimed most of the rest, according to Site Intelligence Group, a US-based monitoring service.

The government denies that either group has a presence in Bangladesh and says domestic groups are responsible.

Sheikh Hasina, Bangladesh’s prime minister, has pledged to track down the killers, blaming the violence on political opponents linked to Islamist parties.

“It may take time, but God willing, we will be able to bring them under control,” Hasina told a meeting of her ruling Awami League party last week.

Since then, Bangladesh has arrested 11,000 people as part of its security crackdown.

The Bangladeshi opposition has accused the police of using the campaign to suppress political dissent.

“In the name of the crackdown against Islamist militants, many ordinary and innocent people are being detained.”

Rights activists also questioned the incidents of deaths in police custody, saying the suspects were shot dead in “cold blood” in encounters staged by officers. 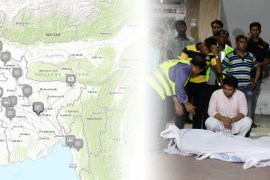 Bloggers, activists, foreigners and minorities have died in a wave of violence. These are the attacks since 2015.