Medical aid charity Doctors Without Borders (MSF) has said it will reject all funding from the European Union in protest at the bloc’s deal with Turkey aimed at stemming the flow of refugees into Europe.

MSF received $63m, about 8 percent of its total budget, from European Union institutions and its 28 member states last year.

“The EU deal is the latest in a long line of policies that go against the values and the principles that enable assistance to be provided,” said Jerome Oberreit, the secretary general of MSF, adding that the agreement with Turkey “is not aimed at providing for those most in need. It is aimed at … border control.

“We cannot accept funding from the EU or the member states while at the same time treating the victims of their policies. It’s that simple.”

Under the Turkey deal in March, Ankara agreed to take back all migrants and refugees landing in the Greek islands who did not apply for asylum, and to crack down on people smuggling across the Aegean Sea.

In exchange, the EU said it would resettle one Syrian refugee from camps in Turkey for every Syrian that Ankara takes back from Greece.

MSF said 8,000 people, including hundreds of unaccompanied minors, had been left stranded in the Greek islands by the deal.

Oberreit said MSF still planned to keep working in Greece and near the Turkey-Syria border but would seek money from other sources to keep its projects going.

The charity also noted that it would honour all ongoing projects with EU funding but not seek European institution or government money for future projects around the world.

MSF said its medics had treated 200,000 men, women and children in Europe and on the Mediterranean Sea in the past 18 months.

The European Commission said it “takes note” of the MSF decision, stressing that it affected only just over 1 percent of its 1.5 billion euro ($1.7bn) annual aid budget.

European Commission spokesman Margaritis Schinas rejected criticism of the Turkey deal, saying: “The Commission prefers the interpretation of our 28 member states, of the Council of Europe and the United Nations, which are closer to our analysis of the deal rather than the one that the MSF did today.” 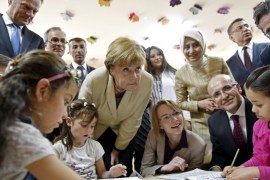 EU leaders praise Turkey for its treatment of refugees