Tehran – In 2011, Khodadad Shakalzehi travelled 1,400km from Iran’s remote Balochistan province to its capital of Tehran. There, he held a small concert to raise money to cover the expenses of his upcoming heart surgery.

A tiny stage was set up in an art gallery, and about 30 people attended. Golfam Khayam, a 31-year-old Iranian composer and classical guitarist, was among the audience. The indigenous Balouch tunes that Shakalzehi played on that October night opened up new musical horizons for Khayam.

“Shakalzehi’s concert was a shock for me,” Khayam said. “At that very moment, I realised that a completely different approach to performance and improvisation did exist.”

This inspiration from Persian ethnic music added a new colour to her musical style, and resulted in the founding of the Naqsh Duo, a musical project aimed at giving a voice to Iran’s forgotten ethnic groups, and their music and rich culture.

On May 20, the Iranian duo – with Khayam on guitar and Mona Matbou Riahi on clarinet – released an album titled Narrante under the internationally acclaimed ECM Records, in Munich. By releasing their work through ECM, the Naqsh Duo broke new ground for Iranian musicians on the international scene.

According to Manfered Eicher, the founder and leader of ECM Records, the music of the Naqsh Duo is not limited to one genre: “Everyone who has an open ear and understands the poetic dialogue of the duo will appreciate their music,” he told Al Jazeera.

Eicher, who has over the past four decades released works from avant-garde artists such as Keith Jarrett, Eleni Karaindrou and Avro Part, explains that his main criteria for an album is that it contains “art pieces with personal character; music that is truthful and honest to the audience”.

The members of the Naqsh Duo are not the first Iranian musicians to perform internationally. Iranian male musicians, such as Shajarian and Nazeri, commonly hold concerts in Western countries, mainly for Iranian expatriates.

The Naqsh Duo, however, is targeting a wider audience by integrating nomadic musical elements and improvisation into contemporary classical music.

Their album is like a narrative that translates our folklore music into the international language of music.

According to Pouyan Saadat, 35, an Iranian guitarist and composer who teaches classical guitar in Tehran, the duo is introducing Iranian folklore cultures to the world. “Their album is like a narrative that translates our folklore music into the international language of music,” Saadat says.

For Matbou Riahi, who has performed in different musical projects and festivals over her career, the music of Naqsh conveys a special sense of liberty, with deep roots in the traditional form of storytelling through indigenous music.

“Naqsh is a musical narration of our stories. It is about communicating the personal search that occurs through music and expressing it freely,” she said. “The stories in Narrante are shaped by our experiences of the homeland – its landscape, the people, the essence of its culture, its colours, its dreams, and all that comes with it.”

The innovative art of Naqsh stems from the cultural diversity of nomadic minorities scattered across Iran, a Middle Eastern country whose modern history has been shaped by a patchwork of mini-societies.

Music plays a pivotal role within the multiple Iranian subcultures. Regardless of official bans or approvals, music remains an integral part of the everyday lives of Iranian nomads and tribal settlements.  Key moments in tribal life, such as births, times of planting and harvesting crops, love stories, religious events, war and death, have specific tunes in the rich repertoire of rural life in Iran.

These are the sources that shape the music of the Naqsh Duo.

Working with Persian ethnic music was an enormous challenge for the duo.

“Tradition has survived for thousands of years. So the question is what to do with it and where to take it,” Khayam explained. “What we compose and perform is not traditional music. We are shedding light on elements and details of this music that are hidden under the shadow of tradition itself.”

Khayam’s artistic curiosity led her to a long journey through different Iranian musical folkloric traditions – from the Kurdish and Turkish music of western Iran, to the Khouzestani and Arabic music in the south, and the Balouchi and Khorasani music of eastern Iran.

Apart from regularly performing at international festivals and conducting musical studies at the Music School of the University of Geneva, Khayam also teaches young Iranian musicians in her homeland.

After more than a decade of studying classical music in Western conservatories and years of musical investigation, she is now offering her knowledge to the younger generation.

“Composers like Khayam have the bravery to hold an improvisation workshop based on only one or two musical notes,” says Saadat, who participated in one of her workshops in Tehran Museum of Contemporary Art. “That’s how she fosters creativity in her works and teaches that to her students.”

At the same time, Khayam is exploring different techniques for Persian strum instruments as a research project that keeps her closely in touch with the main inspiration of her music.

“It’s essential to be in touch with traditional musicians,” she says. “You need to breathe the air of your country, which enables you to continue.” 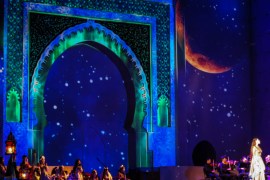 A festival celebrating sacred music brought together artists from across the world in Morocco’s Fez.