Air strikes have killed at least 27 people in rebel-held areas in Syria’s northwestern Idlib province, a monitoring group has said.

At least 21 people, five of them children, were killed in raids, including on a marketplace, in Idlib city, the UK-based Syrian Observatory for Human Rights said on Sunday.

“There were regime and allied Russian warplanes flying in the area today. But we do not know yet which planes had carried out the strikes,” the observatory’s head Rami Abdel Rahman told the DPA news agency.

Separately, aerial bombardments in the town of Maarat al-Numan, about 30km south of Idlib city, killed another six people, the observatory said.

Idlib city and the province by the same name is held by a coalition of rebel groups, including al-Nusra Front, a powerful Syrian group with ties to al-Qaeda.

Russia deployed warplanes to Syria last year to support President Bashar al-Assad against rebels seeking to end his rule. Moscow is also backing Syrian government forces in a separate fight against the Islamic State of Iraq and the Levant (ISIL, also known as ISIS) further east.

There has been heavy bombardment of areas in Idlib province in recent weeks, including air strikes that killed at least 50 people last month. 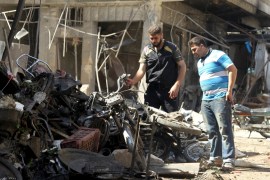 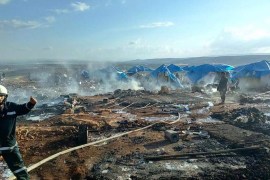 Dozens dead in air raid on camp for displaced in Idlib

Camp for internally displaced Syrians near Turkish border destroyed with at least 30 people killed, including children.