Police in Bangladesh have arrested more than 3,000 people in a nationwide crackdown following a spate of violent attacks as the country’s prime minister vowed to catch “each and every killer”.

Over the the past 10 days, a Hindu monastery worker, an elderly Hindu priest, a Christian shopkeeper and the Muslim wife of a counterterrorism police officer have all been killed.

Those arrested include 37 suspected “Islamist militants” and hundreds of potential criminals who previously had warrants out against them, as well as several hundred ordinary arrests, Bangladeshi police said on Saturday.

“We have arrested 3,155 people … as part of the special drive over the last 24 hours,” A K M Shahidur Rahman, deputy police inspector general, told the AFP news agency.

“The militants included 27 members of Jamayetul Mujahideen Bangladesh,” he added, referring to one one of the main domestic outlawed groups blamed partly for the attacks by the Bangladeshi government.

None of those arrested as part of the crackdown is believed to be “a high-level operator” who might have organised or ordered attacks, police told the Associated Press news agency. All the detainees are being held in jail.

The sweeping crackdown came as Prime Minister Sheikh Hasina vowed to hunt down the killers.

“It may take time, but God willing, we will be able to bring them under control,” Hasina told a meeting of her ruling Awami League party on Saturday.

“Where will the criminals hide? Each and every killer will be brought to book as we did after the 2015 mayhem,” she said, referring to a deadly transport blockade last year organised by opposition parties.

However, opposition parties immediately accused the police of using the crackdown to suppress political dissent.

“Hundreds of opposition activists have been arrested in the police drive,” Fakhrul Islam Alamgir, secretary-general of the Bangladesh Nationalist Party (BNP), told AFP.

“In the name of the crackdown against Islamist militants, many ordinary and innocent people are being detained.”

Hasina has accused the BNP and the country’s largest Islamist party, Jamaat-e-Islami, of orchestrating the attacks after they failed to topple the government in last year’s transport blockade.

READ MORE: Why are bloggers being killed in Bangladesh?

Nearly all the attacks have been claimed by transnational armed groups, including the Islamic State of Iraq and the Levant (ISIL, also known as ISIS) group and various affiliates of al-Qaeda.

The killing on Friday morning of a Hindu worker in northern Bangladesh was also claimed by ISIL, according to the SITE Intelligence Group, a US-based monitoring group.

Hasina’s government, however, says transnational armed groups have no presence in the majority-Muslim South Asian nation of 160 million.

It blames the attacks solely on domestic groups aligned with political opposition parties, though it has presented no evidence of such a campaign and the opposition denies the allegations. 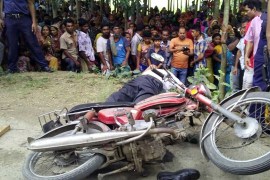 Police suspect “Islamist militants” behind the latest attack, weeks after several others were butchered with machetes. 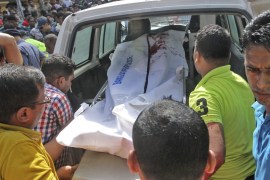