Government forces have dropped barrel bombs on a suburb of the Syrian capital Damascus, which received its first food-aid delivery in four years, according to local activists.

The reported violence on Friday came in rebel-held Daraya just hours after the Syrian Arab Red Crescent (SARC) and the UN delivered food aid to its residents for the first time since it came under siege in 2012.

Writing on Facebook, the Local Council of Daraya said that at least 28 barrel bombs – crude, unguided weapons that kill indiscriminately – were dropped by helicopters.

Late on Thursday, the food-aid delivery came after the UN said the Syrian government had permitted access to 15 of the 19 besieged areas within the country.

The UK-based Syrian Observatory for Human Rights cited local sources saying that the distribution of aid within Daraya was not carried out due to the bombing on Friday.

Daraya has been under siege since November 2012 and has witnessed some of the worst bombardment during Syria’s civil war, now in its sixth year.

He accused Syria of “extraordinary duplicity”, saying the government had finally granted access for aid after heavy international pressure “and then the bombing restarted”.

The delivery of food supplies came a week after a joint convoy of the UN, the International Committee of the Red Cross and SARC reached Daraya and delivered medicine, vaccines, baby formula, and “nutritional items for children” but no food.

The UN estimates that there are currently 592,700 people living under siege in Syria, with the vast majority of them – about 452,700 people – besieged by government forces.

Lifting the siege on rebel-held areas was a key demand by the opposition during indirect peace talks held in Geneva, Switzerland, earlier this year.

‘One meal per day’

SARC said the delivery – which included food, flour and medical supplies – was coordinated with the UN in Damascus.

In a video posted online by media activists in Daraya, an official with the UN’s World Food Programme (WFP) said the organisation had delivered about 480 food rations that would feed around 2,400 individuals for a month.

The official said he had met some beneficiaries of the food aid and community leaders.

“The supply of the very basic commodities is very challenging, so as a consequence the prices of the commodities themselves are very high whenever they are available,” he said.

“As a result, most families are having to do with one meal, which is not complete as a meal, per day in order to be able to get by.”

An amateur video posted online showed UN 4WD vehicles and white SARC trucks driving through sand barriers in the dark until they were met by opposition fighters.

According to photographs posted by local activists, among those joining the convoy into Daraya were Yacoub El Hillo, UN humanitarian coordinator for Syria, and Khawla Mattar, a spokeswoman for Staffan de Mistura, the UN special envoy to Syria.

The UN estimates that 4,000 to 8,000 people live in Daraya, which has been subject to a government blockade since residents expelled security forces in the early stages of the 2011 uprising against President Bashar al-Assad. 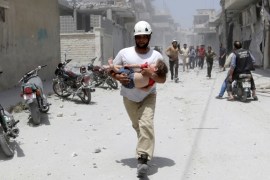 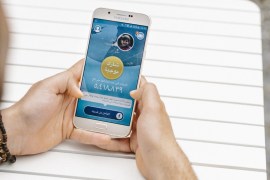 An Arabic version of the ShareTheMeal app aims to feed 1,400 refugee children in Beirut for a full year. 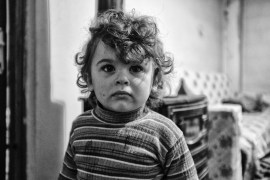 The orphans of Syria’s war

Displaced widows and children of Syria’s war struggle for survival in Hatay, Turkey.