Naval forces loyal to Libya’s internationally backed government say they have taken control of the coast of Sirte as part of an offensive to recapture the city from the Islamic State of Iraq and the Levant (ISIL, also known as ISIS) group.

“Our forces control the entire coast of Sirte,” Rida Issa, the naval commander for central Libya, told AFP news agency on Thursday. “They (ISIL fighters) will not be able to flee by sea.”

The news comes after the internationally backed government said its forces had managed to advance deep into Sirte, capturing two military barracks from ISIL fighters.

“Our forces are in full control of Tagreft barracks and military engineers are inspecting the zone to clear anti-personnel mines,” the forces of the Government of National Unity (GNA) said on Facebook, adding that the fighting 20km outside Sirte left six dead and 15 wounded.

A second barracks, named Al-Jalet, was also seized, as well as a bridge and an intersection that leads to the western entrance to the city of Sirte, the statement said, in operations backed by the Libyan air force.

The GNA forces said one of the air raids destroyed a booby-trapped truck before it reached their lines.

Anti-personnel mines and booby-trapped vehicles left behind by retreating ISIL fighters were failing to slow the GNA forces, the statement said.

The internationally backed government’s forces and those of a rival authority in the east are currently engaged in a race to be the first to drive ISIL out of Sirte, the home town on the Mediterranean of Libya’s overthrown leader Muammar Gaddafi.

The international community believes this could jeopardise efforts to defeat ISIL, whose threat has grown since it established a foothold in Libya at the end of 2014.

Last week, fighters that have also declared their loyalty to the government captured the towns of Nofaliyeh and Ben Jawad in the east of Sirte.

However, military units backing a rival government based in the eastern city of Tobruk have also been advancing on Sirte from the south. 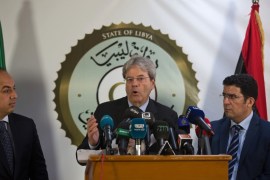 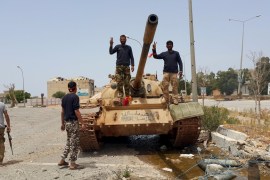