Representatives of Britain, Germany, Italy, Saudi Arabia, the United Arab Emirates, Qatar, Jordan, Turkey and the European Union are in Paris to try to relaunch the Syrian peace process.

Monday’s meeting of the Friends of Syria – an international diplomatic group – was to take place in the presence of Riad Hijab, head of the moderate Syrian opposition coalition.

John Kerry, the US secretary of state, arrived in Paris for the talks and was to hold a meeting with his French counterpart, Jean-Marc Ayrault.

The US and Russia, who support rival sides in Syria’s civil war, said they would work to revive a February “cessation of hostilities” agreement that reduced fighting in parts of the country for several weeks.

Against this backdrop of renewed diplomacy, Syria’s state news agency SANA said, quoting the military high command, that a ceasefire in the embattled northern city of Aleppo would be extended by 48 hours beginning at 1am local time on Tuesday (22:00 GMT Monday).

Al Jazeera’s Jacky Rowland, reporting from Paris, said there are three key issues the Syrian opposition is looking to focus on.

“The opposition wants the cessation of hostilities to take place across Syria and not be a local arrangement,” she said.

“Humanitarian access needs to be provided, with various organisations trying to get food and medical help to people in besieged and hard-to-reach areas.

“There also needs to be discussion on people who have been captured during the fighting, according to the opposition.”

The efforts in Paris came on the same day that forces of Syrian President Bashar al-Assad fought rebels near Aleppo and jets carried out raids around a nearby town, according to a UK-based monitoring group.

Also on Monday, a tentative deal was reported to have been reached to end a strike in a Syrian prison by nearly 800 mostly political detainees.

The arrangement could eventually lead to the pardon and release of those held without charges.

Rights groups said the deal, brokered late on Sunday, would end a mutiny in the Hama prison in central Syria that started last week when political detainees revolted after five inmates were to be taken to Sadnaya prison for the execution of death sentences passed by an extra-judicial military tribunal.

Al Jazeera’s Stefanie Dekker, reporting from Gazientiep in nearby Turkey, said the negotiations were ongoing and details were still filtering through.

“There are government delegations inside the prison, with representatives from the defence ministry and the interior ministry speaking to prisoners about their demands,” she said.

“People have been released but we don’t how many exactly.” 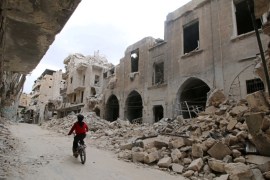