Advances by the Islamic State of the Iraq and Levant (ISIL) group along the southern coast of Libya’s third largest city of Misrata have prompted armed groups in the city to deploy militiamen to counter the offensive.

The mobilisation came on Friday after ISIL took over the Abu Grein crossroads, which lies 120 kilometres south of Misrata where the highway along Libya’s Mediterranean coast meets the main road south into the desert interior.

In a statement, ISIL said it captured five villages along the coast on Thursday in an advance from their stronghold in the city of Sirte 140 kilometres to the east., the SITE Intelligence Group reported.

ISIL captured Sirte in June last year and has since transformed it into a training camp for Libyan and foreign fighters.

Misrata hospital said it had received eight dead and 105 wounded after ISIL’s assaults, without specifying whether they were all security force personnel or also included civilians.

The head of the Misrata military council, Ibrahim Bel-Rajab, said he had ordered all brigades under his command to head to Abu Grein without delay, Libya’s LANA news agency reported.

“Numerous armed vehicles of ISIL have been spotted in this area,” he said.

The developments came as the United Nations-backed unity government in Tripoli announced the formation of a new military command to take charge of the battle against ISIL.

The group is estimated to have around 5,000 fighters in Libya, and is trying to attract hundreds more. 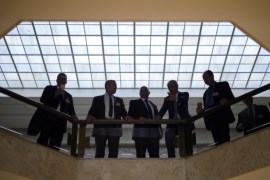 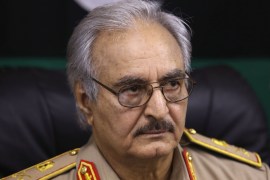