Greece’s public transport networks ground to a halt on Friday after trade unions called for a 48-hour strike to protest at the government’s plans for further austerity measures.

Greek MPs are currently debating an overhaul of the pension system, proposed by the country’s left-wing government under the country’s obligations to rescue lenders from other countries using the euro.

Unions are having a two-day general strike to protest against the vote on a draft legislation scheduled to be held on Sunday.

No public transport services in Athens were working on Friday as metro, tram, bus and rail workers began a strike that is set to run through Sunday.

Train services across the country were halted, and ferries linking mainland Greece to the islands remained anchored in port.

The only mode of transport still available in the capital was taxis.

Other state-run and municipal services, including rubbish collection were also disrupted.

The journalists’ union also joined the strike, and most public and private radio and television channels did not broadcast news bulletins.

Changes to Greece’s pensions system, which caused this weekend’s strikes, were demanded by creditors as a condition of the country’s third bailout in five years, worth $95bn, agreed in July last year.

Opinion: Greece and the swansong of the nation-state

“In the last five years nearly 250,000 Greek businesses have either gone bust or gone abroad, 6,000 of them in the last few months,” he said, “Companies are moving away to Cyprus and Bulgaria, heaping more social misery on the country.

“And with the third wave of austerity measures about to be implemented, things are about to get worse before they get better.”

The strikes come before a meeting of eurozone finance ministers to discuss Greece’s bailout on Monday in Brussels.

The meeting was initially scheduled for Thursday but was cancelled amid disagreements between Athens and the International Monetary Fund, which has demanded more reforms from Greece.

Marches are expected in Athens and other cities this weekend, coinciding with celebrations for International Workers’ Day this Sunday which were postponed from May 1 owing to the timing of Easter in the Orthodox Church.

The strikes are the fourth to be called since Prime Minister Alexis Tsipras’s leftist government won re-election after organising a referendum on the country’s bailout. 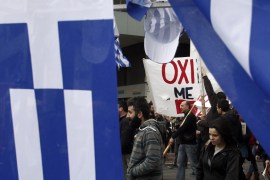