A Brazilian Supreme Court judge has suspended Eduardo Cunha, the senior lawmaker at the centre of efforts to impeach President Dilma Rousseff, citing his attempt to obstruct a probe into his alleged corruption.

The speaker of Brazil’s lower house of Congress is the architect of the impeachment drive, which is expected to see Rousseff forced to step aside from office on Wednesday.

Despite facing criminal charges including bribery and hiding money in Swiss bank accounts, Cunha has survived months of attempts by prosecutors and a congressional ethics committee to see him brought to justice.

But the man Brazilians refer to as a real-life Frank Underwood – the corrupt US politician in the hit Netflix series “House of Cards” – appeared finally to have been brought down by Justice Teori Zavaski.

The ruling reflected concerns on the Supreme Court that with Rousseff suspended and replaced by her vice president, Michel Temer, Cunha would have moved up to first on the presidential succession list.

Zavaski said in his ruling “there is not the least doubt that the suspect does not meet the minimum personal requirements for fully exercising the functions of speaker of the chamber of deputies at this time”.

“That qualifies him even less so for substituting as the president of the republic,” he said.

Prosecutors had long asked for Cunha to be brought to trial in the Supreme Court – which handles all high-ranking politicians – but the court was said to be wary of suspending Cunha while the impeachment battle was in full flow in the lower house.

Cunha’s removal from the scene at this point is considered unlikely to change the momentum against Rousseff, since she has already been badly weakened and her case is now in the hands of the Senate.

A conservative member of Brazilian politics’ growing Evangelical wing, Cunha belongs to the center-right PMDB party, which fatally wounded Rousseff when it broke from her coalition and decided to back impeachment.

Temer is also from the PMDB and Rousseff has accused him and Cunha of being conspirators using the impeachment process to bring her down in a “coup.”

Cunha is accused of taking bribes as part of the massive corruption scheme centered on Petrobras, the huge state oil company. Dozens of politicians and top executives have been charged or in some cases already found guilty and jailed.

Cunha, who rejects the charges, is also being investigated by the congressional ethics committee over allegedly lying to Congress about possessing secret Swiss bank accounts. 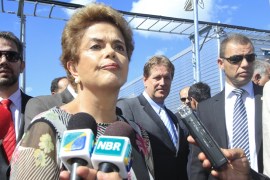 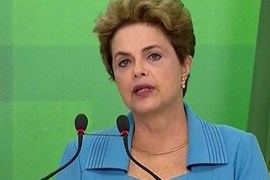 Brazil’s president says she is outraged in emotional address after Congress authorised a move to impeach her.