Palestinian children with cancer are suffering from the siege of the Gaza Strip as the construction of what is meant to be the first public pediatric cancer department has ground to a halt due to import restrictions.

Israel and Egypt’s continued embargo along with the growing political infighting between Hamas and Fatah have made things so complicated for doctors and patients that even diagnosing which type of cancers the children have cannot be done in Gaza.

Instead, tests have to be sent to Israel, Jordan or the occupied West Bank. Even patients have to be shipped out due to lack of medication and equipment.

Two-year-old Mumen who is suffering from leukaemia had to travel with a stranger to the West Bank to get proper medical treatment.

“We applied for treatment outside Gaza. But if a child’s travel companion is less than 55 years old, it takes one month to obtain Israeli permission. Since we wanted to get him treatment quickly, we had to send him to the West Bank with a relative he didn’t know who is 65,” said Majed al-Moranakh, Mumen’s father.

“Can you imagine what it was like for him to be taken by someone he’s never seen before? He was screaming in the ambulance, wondering where his family was, wondering why he was with a stranger.”

Steve Sosebee of Palestinian Children’s Relief Fund says every delay in improving the healthcare system in Gaza only prolongs the humanitarian crisis there.

“I think it’s important now to ask the world why Gaza children’s lives are less important and less valuable than the lives of any other children in the world,” he told Al Jazeera. 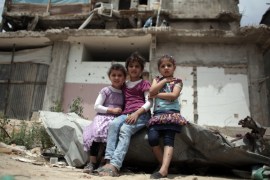 It’s time for the United Nations to consider the morality of its Gaza Reconstruction Mechanism.