The local affiliate of the Islamic State of Iraq and the Levant (ISIL, also known as ISIS) group claimed responsibility for Monday’s attacks.

In the first attack, a car bomb hit a crowd of young men queueing to join the Yemeni army, causing at least 20 casualties, the Associated Press news agency said, quoting an unnamed a security official.

The explosion went off near the Badr military base in the Khormaksar district of Aden, where the government of President Abd-Rabbu Mansour Hadi is based.

The bomber detonated an explosives belt after joining the queue at the recruitment centre.

A second explosion went off inside the base afterwards, killing at least 25 more.

Aden al-Ghad, a local news website, showed pictures of soldiers picking up bloodied comrades in uniform from the ground and witnesses reported seeing ambulances with blaring sirens collecting the wounded from the scene.

In a statement after the attacks, ISIL called the men it killed “apostate soldiers”.

Sympathisers of ISIL used social media to provide further details. They said a native of Aden they identified as Abu Ali al-Adani was responsible for one of the blasts.

A picture was posted of a man using crutches approaching the centre, followed by before and after shots of the explosion site.

The blasts came as more than 148 people died in attacks in Syria, also carried out by ISIL on Monday.

Armed groups have gained ground in Aden since forces loyal to Hadi, and backed by an Arab coalition, drove Houthi rebels, backed by Iran, out of the city in July last year.

Al-Qaeda and ISIL have claimed responsibility for a rash of attacks on government forces who drove Houthi rebels out.

But over the past two months, government and coalition forces have hit back, driving the armed fighters out of Aden, as well as Mukalla, the capital of Hadramawt province, which they had controlled for a year. 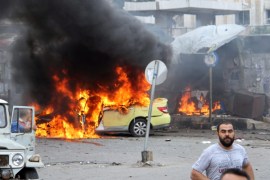 String of car bombs and suicide attacks hits hospital entrance, bus station and other places in Latakia and Jableh. 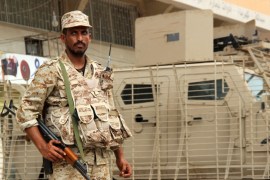 Shallal Shayei, who was travelling with Aden’s governor, escapes second attempt on his life within days. 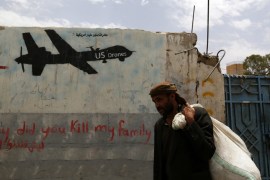 General Shallal Shayae escapes unharmed from the latest in series of attempts to kill him.