Syrian rebel groups have said that they will no longer abide by a ceasefire deal unless the Syrian army ends a major offensive on their positions in the suburbs of Damascus within 48 hours.

A statement by the Free Syrian Army (FSA), signed by nearly 30 rebel groups that operate across Syria, said that they would deem the ceasefire as having “totally collapsed” if the assault by Syrian government and allied Lebanese Hezbollah forces fighters did not cease within two days.

The signatories, who include Western and Turkish-backed groups operating on the main frontlines in northern and southern Syria, said that once the two-day period had ended, rebels would respond with “all the legitimate means to defend the civilians living in these areas”.

Syrian forces and allied fighters seized an extensive area southeast of the capital on Thursday. The rebel-held town of Daraya, located just a few kilometres from President Bashar al-Assad’s Damascus palace, was also pounded for the first time since the broader “cessation of hostilities” accord, which took effect at the end of February.

In their joint statement, the rebels said that the continued attacks by the army on the besieged rebel-held areas around Damascus and their strongholds in the northern city of Aleppo and Idlib province were putting peace-making efforts at risk.

Rebel brigades were considering withdrawing from a “futile political process”, they said, which “gives legitimate cover to continue the crimes and massacres by the criminal Assad regime and its allies.”

The Syrian army stopped extending the cessation of hostilities this month after accusing rebels of violating the agreement by firing at government-controlled residential areas.

Meanwhile, air strikes hit the only road into rebel-held areas of Aleppo city on Sunday in the heaviest bombardment since February, a rebel official and monitors said, jeopardising access to an area where about 300,000 Syrians live.

They said Russian warplanes had carried out the attacks on the Castello road, which was still open but dangerous.

The Syrian Observatory for Human Rights group said the road had been hit in a week of escalating air strikes, with Sunday’s attack the most intense yet.

A truce was brokered by the United States and Russia in February. But the agreement has since unravelled, with fighting and bombardment in Aleppo playing a big part in its collapse.

Dozens of civilians were killed in the air strikes on residential areas in rebel-held towns and cities in the last week.

The US and Russian-brokered ceasefire has unravelled largely due to fighting and bombardment in Aleppo.

Hundreds of families fled the area, which rebels had controlled since 2012.

The town of Daraya, also near the capital, was one of the first to erupt in demonstrations against the government in 2011. It has been under a strict regime siege since late 2012. 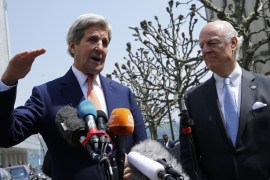 Aleppo: John Kerry calls for bombardment of city to end

As last-ditch attempt is made to save Geneva peace talks, US secretary of state blames both sides for fierce fighting.