Donald Trump has slammed Hillary Clinton as “heartless” for backing restrictions on gun ownership that he said would leave Americans in high-crime areas unable to protect themselves.

The gun rights organisation endorsed the presumptive Republican nominee ahead of his remarks, despite Trump’s previous support for measures such as an assault weapons ban that the NRA vigorously opposes.

But the business mogul-turned-politician has taken a far less restrictive stance on guns during the Republican presidential primary.

His call for ending “gun-free zones” across the country was enthusiastically welcomed by the NRA crowd.

Trump centred his remarks on Clinton, claiming she would seek to “abolish” the Second Amendment through the Supreme Court and release violent criminals if elected president.

He also challenged Clinton to follow his lead and release a list of potential Supreme Court nominees.

In his speech, Trump referred to her as “Heartless Hillary” – a new nickname from the branding expert for his potential Democratic opponent – for backing restrictions aimed at reducing gun deaths, saying her proposals would instead leave law-abiding citizens exposed to criminals.

“She’s putting the most vulnerable Americans in jeopardy,” Trump said. He added that women in particular would be at risk, a nod to what he’s said will be a security-focused appeal to women in the general election.

Trump heads into the fall campaign with stunningly high disapproval ratings with women. The supremely confident Trump appeared to acknowledge that weakness, saying that while his poll numbers with men are strong, “I like women more than men.”

Senior policy adviser Maya Harris said Clinton believes “there are common-sense steps we can take at the federal level to keep guns out of the hands of criminals while respecting the Second Amendment.”

Among the measures Clinton supports are expanding background checks to sales at gun shows and online purchases, and reinstating a ban on assault weapons.

NRA leaders were blistering in their condemnation of Clinton, accusing her of threatening Americans’ freedom and being driven by personal greed. During one speech, an NRA leader briefly played a video showing Clinton barking like dog.

The organisation’s leaders were less robust in their endorsement of Trump, mentioning him by name only briefly and saying little about his record on guns.

Trump backed an assault weapons ban, as well as slightly longer waiting periods for gun purchases, in a 2000 book. He’s since said such bans don’t work and has also called for making it easier for law-abiding citizens to carry guns for self-protection. 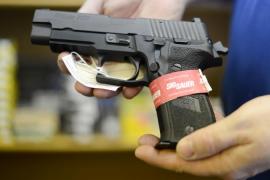 Gun ownership is a sensitive topic that up until now hasn’t really been talked about despite the recent mass shooting. 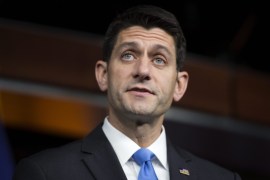 Paul Ryan, the highest-ranking Republican public official, and Trump work to unite the party ahead of general elections.