An Israeli court will launch hearings to decide if a NGO that used anonymous testimony from soldiers to campaign against abuses in the occupied Palestinian territories should reveal its sources.

The state attorney has demanded that Breaking the Silence reveal its sources, saying anonymous witnesses allow potential lies to spread and make it impossible to investigate alleged abuses.

Breaking the Silence co-founder Yehuda Shaul said the hearings were aimed at closing down the NGO and insisted the group is determined to protect the identities of its sources.

Deliberations will open on Sunday in the Magistrates Court in Petah Tikva near Tel Aviv, with state attorneys expected to argue their case.

The NGO provides a platform for military veterans to describe what they say were disturbing aspects of their service in the 2014 war in the Gaza Strip and in operations in the Israeli-occupied West Bank.

It has faced increased political pressure in Israel, where Prime Minister Benjamin Netanyahu presides over one of the most right-wing governments in the country’s history.

In March, then defence minister Moshe Yaalon accused the NGO of “treason” by asking discharged soldiers to reveal classified information, a charge denied by the group.

The Israeli military police has also demanded the names of the NGOs sources – a request it refused.

“In January, in the midst of all the attacks against Breaking the Silence, the state attorney has taken a decision to pursue this case,” Shaul told AFP.

“An act like this will shut down Breaking the Silence – no soldier will speak any more if he knows that the next day he can go to prison,” he said.

Shaul said the anonymous testimonies that triggered the ire of the state attorney and others were published in a book about the 2014 Gaza War, in which 2,251 Palestinians and 73 Israelis died, and included allegations of abuse by soldiers.

A statement by the justice ministry on Friday said that “Israel believes there is a public interest of the highest degree in clarifying suspicions against the suspect and other involved parties”.

Justice Minister Ayelet Shaked has said Breaking the Silence and other NGOs provided evidence to the United Nations which formed the basis of a 2014 UN inquiry into the Gaza war, which concluded Israel and Palestinian fighters may have been guilty of war crimes.

Breaking the Silence was banned from visiting Israeli schools back in December. “Whoever harms IDF [Israeli army] soldiers has no place in the Israeli education system,” Education Minister Naftali Bennet said in a post on his Facebook page at the time. 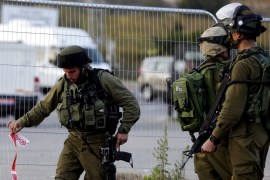 The NGO Breaking the Silence barred from working with school children after it was accused of “lies and incitement”.