Heavy and steady rain over the past few days has led to extensive flooding over a good part of central and southern China.

Thousands of people have been evacuated from their homes and there has been widespread travel disruption.

These seasonal rains known as the “plum rains” or Meiyu-baiyu rains cause flooding every year, usually affecting the country for around two months between late May and early summer, but they have come a little early this time round.

The torrential downpours arrived in China’s Hunan Province on Wednesday. Youxian County was one of the worst hit areas. Up to 150mm of rain was recorded here by Friday morning.

This resulted in a swollen river cutting off the village of Aolin, leaving 1,500 residents stranded. Inflatable boats had to be used in the rescue operations as power supplies were also lost.

The rains also extended into eastern and southern parts of the country. The flood-waters were waist-high in parts of east China’s Jiangxi Province.

As much as 141mm of rain fell in the low-lying Yongxin County from Thursday into Friday, leaving hundreds more people stranded.

Further south, Guigang City was also in a serious state of flood. Washed-out cars were left abandoned on the roads. Rainfall totals reached 272mm in Guilin City by Friday morning.

Traffic was also disrupted across Guangdong Province and schools were forced to close. More than 200 pupils were trapped in one school and had to retreat to the second floor of their building as the waters reached two metres deep in places.

Quieter weather is expected over the next few days before further heavy showers return to central China by the middle of next week. 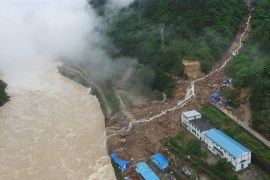 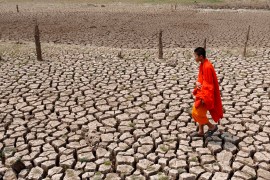 Much of the region, including Thailand and Laos, struggling to cope with the severe weather conditions.