San Francisco’s police chief resigned at the request of the US city’s mayor hours after an officer fatally shot a young black woman allegedly driving a stolen car.

Thursday’s resignation was the result of the culmination of several racially charged incidents that occured in the Californian city in the past year.

The use of lethal force by US police – especially by white officers against African-Americans and other minorities – has been the focus of nationwide protests.

The San Francisco Police Department and Chief Greg Suhr have faced mounting criticism and protests for months in the wake of several high-profile police killings and a racist text message scandal.

“I have previously expressed confidence in Chief Suhr because I know he agrees with and understands the need for reform,” San Francisco Mayor Ed Lee told reporters at a press conference at City Hall.

“But following this morning’s officer-involved shooting and my meeting with Chief Suhr this afternoon, today I have arrived at a different conclusion to the question of how best to move forward.”

Policing the US police: How can racism in police practices be curbed?

Hours earlier, Suhr told reporters at 9:45am two officers approached a 27-year-old woman as she sat in a car that had been reported as stolen.

The woman tried to drive off, crashing into another vehicle fewer than 30 metres away. She was shot by one of the officers, a sergeant, after refusing to comply with their orders, Suhr said. She later died at a hospital. Suhr said the officers have not been interviewed.

“This is exactly the kind of thing with all the reforms we are trying to prevent,” Suhr said before he resigned.

Thursday’s shooting occurred in San Francisco’s Bayview neighbourhood, where in December police fatally shot a black man who was a suspect in a stabbing.

Police said then that 26-year-old Mario Woods, whose family has sued the city, was holding a knife and refused to drop it.

Bystander video of that shooting, which went viral after being published online, showed Woods being shot in a hail of gunfire by officers. The city’s public defender has called the shooting “unnecessary”. 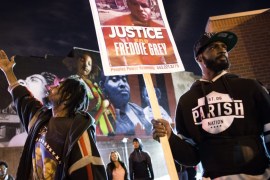 The boy was wounded by gunfire on the first anniversary of mass protests against police in Baltimore. 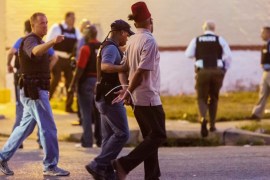 Fatal shooting of black teen in US city sparks protests

Crowds come out on streets of St Louis in Missouri state against killing of 18-year-old teenager by white policeman.