The death toll from a coordinated assault by the Islamic State of Iraq and the Levant (ISIL, also known as ISIS) group on a natural-gas plant outside Baghdad has risen to 14, Iraqi officials say.

The announcement takes the total number of fatalities from Sunday’s bomb attacks in or close to the capital to at least 29.

The attack on the government-run plant started at dawn with a suicide car bomber hitting the facility’s main gate in the town of Taji, about 20km north of Baghdad.

Then several suicide bombers and fighters broke into the plant and clashed with security forces, leaving 27 soldiers wounded, an official said.

ISIL, on the other hand, said in an online statement that four fighters with machine guns had killed the guards at the plant which it said the Iraqi army was using as a headquarters.

When reinforcements arrived, they set off a parked car bomb before clashing with the security forces and detonating their suicide vests.

A spokesman for Baghdad Operations Command said three of the facility’s gas storages were set alight before security forces were able to bring the situation under control.

In a statement to the press, Hamid Younis, Deputy oil minister, said firefighters managed to control and extinguish a fire caused by the explosions. Younis said technicians were examining the damage.

The electricity ministry said two nearby power stations had halted operations due to a cut in gas supplies from the Taji plant.

It was not clear how long it would take to restore flow to the power stations, which provided 153 megawatts to the already overstretched national grid before the attack.

Video broadcast by Al Hadath TV showed a fireball surging from the plant.

An employee who lives nearby said after hearing a powerful blast he saw flames and black smoke coming from inside the facility. Dozens of police and army vehicles rushed to the site where shooting lasted for about an hour, he said.

In Sunday’s assault, a car bomb targeting a shopping area in the town of Latifiyah, about 30km south of Baghdad, killed seven people, including two soldiers, police and hospital officials said.

They said that 18 people were also wounded in the attack, four of whom were soldiers.

The attacks killed a total of 29 people across the country.

Since Wednesday, more than 140 people have been killed in a spate of bombings in Baghdad and elsewhere.

Attacks in its Shia neighbourhoods marked Wednesday as the year’s bloodiest day for Baghdad, with death toll crossing the 90 mark.

Haider al-Abadi, Iraq’s prime minister, said on Saturday ISIL was taking advantage of a political crisis in the country, prompted by his attempt to overhaul its quota-based governing system, to conduct bombings in areas under nominal government control.

Some officials, however, say the ISIL attacks are simply a sign that the group is attempting to divert attention from recent losses.

ISIL recently lost some ground in Iraq, but it still controls significant areas in northern and western Iraq. That includes the country’s second largest city, Mosul.

“Certainly Daesh (ISIL) has always looked for options to divert attention away from losses but there are two other things that are driving this wave of bombings,” Afzal Ashraf, consultant fellow at the Royal United Services Institute (RUSI), told Al Jazeera.

“One is Daesh is expecting a major assault in Mosul and it wants to do whatever it can to weaken the government.

“Also the group wants to divert security forces that might be used in attacks against it to the defence of Baghdad.”

According to the UN, at least 741 Iraqis were killed in April in ongoing violence, a sharp decline from the previous month.

In its monthly report issued on May 1, the UN mission to Iraq put the number of civilians killed at 410, while the rest were members of the security forces.

A total of 1,374 Iraqis were wounded that month, it said.

Baghdad remains the worst-hit area in terms of documented deaths, with 232 civilians killed and 642 wounded in April.

Speaking to Al Jazeera from London, Ghassan al-Attiyah, of the Iraqi Institute for Democracy and Development, said the central problem lies in the lack of unity among the Iraqi people, as well as the lack of confidence citizens have in their government.

The fight against ISIL has exacerbated the sectarian conflict in Iraq, mostly between the Shia majority and the Sunni minority, which has seen flare ups since the US-led invasion in 2003.

The sectarian tensions  threaten to undermine efforts to dislodge ISIL  from vast areas in the north and west of Iraq, including swathes of Anbar, that the fighters seized in 2014. 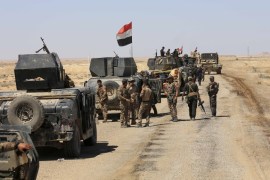 Wave of suspected ISIL attacks kill at least 60 in Iraq

At least 62 killed and 83 wounded in string of car bombs and suicide attacks targeting the military and civilians. 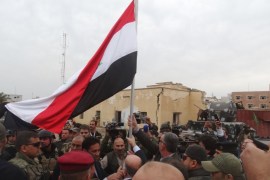