Hundreds of pro-government troops have been killed in Aleppo and Deir Az Zor provinces as opposition armed groups and government forces fight over control of several areas, according to sources.

At least 170 pro-government troops have been killed in clashes that occurred in Khan Touman and Deir Az Zor city, the UK-based Syrian Observatory for Human Rights said on Saturday.

On the ground, there are conflicting reports about the fate of Al-Assad Hospital in Deir Az Zor city.

Government forces claim to have scored a small victory by retaking the facility from fighters of the Islamic State of Iraq and the Levant (ISIL, also known as ISIS) group.

However, ISIL is still in control of other parts of the city.

The developments come as John Kerry, the US secretary of state, was in Saudi Arabia where he is meeting King Salman bin Abdulaziz Al Saud and the country’s foreign minister.

Kerry has embarked on an ambitious week of negotiations to push for international cooperation to end the fighting in Syria.

He will go to Vienna, Austria, later to make his case with European leaders.

The group said on Saturday its fighters attacked the hospital as they pressed an advance to control the oil-rich Deir Az Zor city and its vital airbase.

The attack prompted clashes with government forces providing security for the hospital in which six fighters were killed, a Syrian Observatory spokesman said.

The fighters “seized the hospital and captured the medical staff, holding them hostage”, he said, adding that the battle was still raging.

ISIL’s Amaq news agency said the group also took control of a checkpoint, a fire station and university accommodation in the city close to Syria’s eastern border with Iraq.

Amaq also said that the fighters had taken territory near to the state-held military airport.

ISIL controls about 60 percent of Deir Az Zor, including the centre and the north of the city.

It has imposed a siege on government-held districts in the south and the east where about 200,000 civilians have been trapped since March 2014.

The fighters, who also control nearly all the surrounding province, have repeatedly attacked the government enclave and seized several neighbourhoods since the start of this year.

But their efforts to capture the airbase located in the south of the city have been crushed by government troops.

Elsewhere in Syria, government air strikes have killed at least 12 people and left several injured in Idlib city, among them children, the Syrian Observatory said on Sunday. 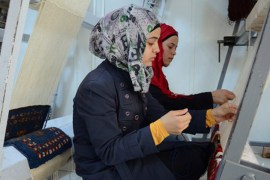 Two women living in a refugee camp in Turkey have been making carpets that are being bought in Japan and China. 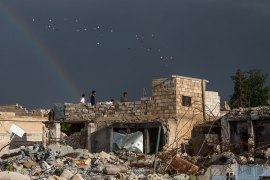 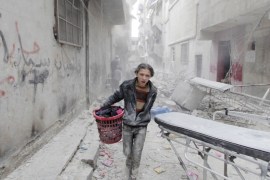 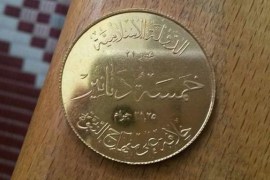 Is ISIL facing a cash crunch?

The US says it has destroyed up to $800m of ISIL cash, but has it dented the armed groups’ finances?