Turkey has said that talks with the European Union on a deal providing visa-free travel in return for stopping a flow of refugees into Europe had reached a deadlock.

The comments on Friday by Turkey’s EU Affairs Minister Volkan Bozkir followed talks with senior EU officials on ways of ending an impasse over part of the EU’s deal with Turkey.

“I am not very optimistic about the outcome of the talks we held in Brussels today. It’s essential that the European Commission find a new formula,” Bozkir told reporters in Brussels, in comments broadcast live on Turkish television.

Bozkir also said that it was not possible for Turkey to make changes to its “anti-terror” law given the security situation in the country, pointing to a spate of recent bomb attacks, Reuters news agency reported.

He said Turkey’s law was “no worse” than other countries’ “anti-terror” laws, and called on the European Commission to reconsider its stance.

Bozkir’s comments come after President Recep Tayyip Erdogan ratcheted up pressure on Europe over the deal, accusing the bloc of setting new hurdles for visa-free travel and threatening that Turkey may go its own way if they failed to agree.

Addressing a large crowd on Friday in northwest Turkey, the Turkish president said that western countries care more about gay and animal rights than the fate of conflict-stricken Syrians.

Erdogan also accused the West of possessing a mindset “remnant of slavery and colonialism”.

While Brussels is desperate for the deal to succeed, it also insists that Turkey meet 72 criteria, including reining in its broad “anti-terror” laws.

Turkey has suffered a series of bombings this year, including two suicide attacks in tourist areas of Istanbul blamed on the Islamic State of Iraq and the Levant (ISIL – also known as ISIS) and two car bombings in the capital, Ankara, which were claimed by a Kurdish armed group.

Eight soldiers and 22 Kurdish fighters have been killed in clashes over the last two days, authorities said on Friday, as violence widened following two bombings.

The visa waiver is an incentive – along with up to $6.8bn and fast-track EU membership talks – for Turkey to stop refugees reaching Europe and take back thousands more. 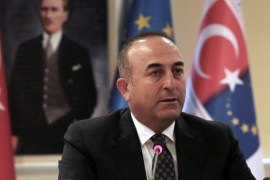