Clashes have erupted in Bangladesh after Motiur Rahman Nizami, a leader of the Jamaat-e-Islami political party, was hanged on charges relating to the massacre of intellectuals during the 1971 independence war.

Police fired rubber bullets on Wednesday after hundreds of Jamaat supporters attacked them with stones in the northwestern city of Rajshahi.

“There were 500 Jamaat activists who were protesting against the execution. We fired rubber bullets as they became violent,” Selim Badsah, Rajshahi police inspector, told the AFP news agency.

He said about 20 people were arrested.

Jamaat activists and supporters of the governing Awami League also clashed in Chittagong, where about 2,500 attended a service for Nizami, Masudul Hasan, the port city’s deputy police chief, told AFP.

Security was tight across the country, with checkpoints erected on main roads in Dhaka to deter violence and thousands of police patrolling the Bangladeshi capital.

“The situation in Dhaka as well in other parts of the country remains calm,” Al Jazeera’s Tanvir Chowdhury said.

“On Wednesday, absentia funerals were held for Nizami in various cities.”

In recent months “Jamaat has not been able to organise any kind of protest on the streets, mainly due to heavy-handed tactics used by the security forces,” our correspondent said.

He said the government was considering to ban Jamaat. The country’s largest Islamist political party has already been barred from contesting elections since 2013.

A crowd of activists celebrated outside the jail. Nizami’s body was later handed over to his family for burial in the northwestern district of Pabna, his ancestral home.

“We buried him in the morning,” said Abdullah al-Mamun, Nizami’s cousin.

Jamaat issued a statement condemning the execution and issued a call for a day-long general strike across the country on Thursday.

Trying suspected war criminals has posed a major challenge for the government of Sheikh Hasina.

The Bangladeshi prime minister has faced strong international pressure to stop executing people such as Nizami, who opposed secession of former East Pakistan as Bangladesh.

Amnesty International and Human Rights Watch have protested against the death sentence for Nizami.

The human-rights groups also raised questions about the trial process, but Hasina and her colleagues have rejected all claims that the judicial procedures were flawed.

“For example, Nizami was allowed to have only four defence witnesses as a man fighting for his life. And the court did allow the defence to challenge the inconsistencies in the testimonies of prosecution witnesses,” Robertson told Al Jazeera from Bangkok.

“Finally, we have seen a significant problem in all of these war crimes trials, where the presiding judge was having ongoing discussions about judicial strategy with external consultants and prosecutors in a way that raises concerns about the independence of the panel.”

Nizami was convicted of three major charges stemming from the 1971 war, including the killing of 480 people.

He was also held responsible for the killings of dozens of intellectuals, including teachers, journalists and doctors, only two days before Bangladesh gained its independence in 1971.

Bangladeshi authorities say Pakistani soldiers, aided by local collaborators, killed three million people, raped 200,000 women, and forced up to 10 million people to flee the country during the nine-month war in what was then known as East Pakistan, renamed Bangladesh after independence.

However, independent experts have disputed the numbers put forth by the government.

Nizami is the fifth senior official from opposition parties to be executed since 2013 for alleged war crimes during the 1971 war.

Three other senior members of Jamaat and a top leader of the main opposition Bangladesh Nationalist Party led by Khaleda Zia, the former prime minister, have also been hanged.

David Bergman, an investigative journalist based in Dhaka, told Al Jazeera there were long-standing allegations against Nizami since the end of the 1971 war.

“So the fact that there was a trial in which he was accused of these crimes is not itself political,” he said.

“There is no doubt that many members of Jamaat are concerned about the trials and executions targeting its members, and the party itself is subject to significant repression.”

Speaking to Al Jazeera, a senior Jamaat leader based abroad also acknowledged that Nizami was a supporter of Pakistan in 1971, but said: “All other allegations of killing, murder and rape are not correct. The tribunal has miserably failed to prove any of those allegations.”

He said Jamaat leaders inside Bangladesh were not giving interviews because their phones were tapped and their families faced harassment if they spoke to news media.

“Not only leaders, thousands of middle-ranking and ordinary Jamaat workers have been forced to flee their homes due to police repression or harassment,” he said.

“They are refugees in their own country due the vindictive nature of this government.

“Their agenda is to wipe out Islam gradually and whoever they think opposes their policies is being targeted.” 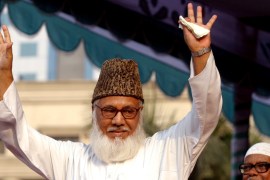 Jamaat-e-Islami calls for general strike after hanging of its leader who was convicted of genocide, rape and massacres.