Canadian firefighters are looking to cooler weather to help with their battle against the country’s most destructive wildfire in recent memory, as officials sought to gauge the damage done to oil sands boomtown Fort McMurray.

Cooler weather and light rain stopped the blaze from growing on Sunday, while a change in wind direction took the flames away from Fort McMurray whose entire population has been evacuated, according to officials.

There remains no timeline in place for getting Fort McMurray’s 88,000 inhabitants back to their home town.

Neither is there any indication of when energy companies would be able to restart operations in the oil sand-rich town.

“It definitely is a positive point for us, for sure,” said Alberta fire official Chad Morrison in a news briefing, when asked if the fight to contain the flames had a reached a turning point.

“This is great firefighting weather. We can really get in here and get a handle on this fire.”

The wildfire scorching through Canada’s oil sands region in northeast Alberta since last Sunday night had been expected to double in size on Sunday, threatening the neighbouring province of Saskatchewan.

But with the fire moving into its second week, favourable weather helped hold it back, giving officials hope that they could soon begin assessing the damage to Fort McMurray, close to where the fire started.

“As more and more fire has burned out around the city and the fuel around the city starts to disappear … We are starting to move into that second phase of securing the site and assessing the site,” Alberta Premier Rachel Notley said.

Officials said on Sunday that 34 wildfires were burning, with five out of control. There are more than 500 firefighters battling the blaze in and around Fort McMurray, with 15 helicopters and 14 air tankers. 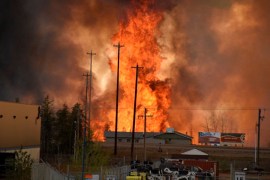 Over 80,000 Fort McMurray residents have been forced to flee their houses and nobody knows what they will come back to. 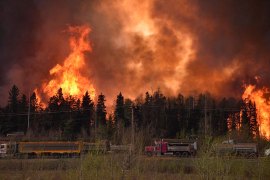