At least three explosions rocked the centre of Kabul on Saturday shortly after visiting US Secretary of State John Kerry left Afghanistan following a surprise visit to the war-torn country.

Azimy said a projectile also landed inside the compound near where the US embassy and a CIA office are housed.

No casualties were reported and no group claimed responsibility for the attack.

“Afghan political analysts are now saying that it was a message from the Taliban to tell the Afghan president [Ashraf Ghani] and Kerry that they are not far away, and that they can launch attacks on even the most secure compound,” Azimy reported.

Earlier on Saturday, Kerry called on the Taliban to re-engage in peace talks dormant for almost a year.

He said there was no change now in President Barack Obama’s plans for American troop levels in Afghanistan. There are 9,800 US forces on the ground in the country, and that number is set to fall to 5,500 next year.

“But he [Obama] always has said he will listen to his commanders on the ground,” Kerry said, referring to troop levels.

In the coming months, NATO and international donor summits could define long-term security and aid commitments critical to the Afghan government’s survival, and Kerry’s visit sought clarity on Afghanistan’s direction.

The Taliban – toppled from power in a US-led invasion in 2001 – has waged an armed campaign to overthrow the Afghan government and re-establish its rule.

The nearly 15-year conflict has killed thousands of people and strained the country’s economy. Members of Parliament say no one was hurt, contradicting Taliban spokesman who claimed the raid caused heavy casualties. 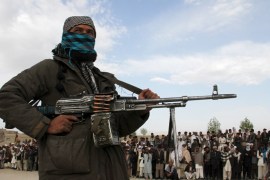