At least five people, including a child, drowned on Saturday after their small vessel carrying Iraqis and Afghans capsized in the eastern Aegean Sea, the Greek coastguard told Al Jazeera.

The latest boat disaster comes a day after 124 people were sent back to Turkey from Greece, as part of the second wave of deportations under a controversial EU-Turkey deal aimed at curbing the refugee flow to Europe.

The Greek coastguard said the five victims – four women and a child – were found in the early hours of Saturday northeast of the Greek island of Samos.

Two men, two women and a child were rescued and were brought to a hospital in Samos.

Among them was a Turkish national, who is believed to be a people smuggler, the spokeswoman, who spoke on customary condition of anonymity, said.

“According to those rescued, there were 14 people overall on the inflatable boat,” she added.

A search-and-rescue operation involving patrol boats and helicopters from the Greek coastguard and the European border agency Frontex was under way for any survivors.

“This horrific tragedy is a sad reminder that people will continue risking their lives, and those of their children,”  Eva Cosse, Greece specialist at Human Rights Watch, told Al Jazeera.

‘It is also a reminder of the great need for safe and legal routes to the EU.”

More than 1.1 million people escaping poverty, war and repression in the Middle East, Asia and Africa reached Europe’s shores last year, while thousands of others died undertaking the perilous journey.

Under the terms of last month’s EU-Turkey deal, all “irregular migrants” arriving on the Greek islands from Turkey since March 20 face being sent back, although the accord calls for each case to be looked at individually.

The deal, however, has been fiercely condemned by rights groups, with the UN refugee agency, Doctors Without Borders, and other aid organisations all pulling out staff from Greek islands in protest.

“This terrible deal with Turkey should be repealed and on the opposite, the EU should advance large-scale refugee resettlement, humanitarian visas, and family reunification,” Cosse said.

“All this should be guided by a commitment to safe and legal alternatives to human smugglers for people who need refuge.” 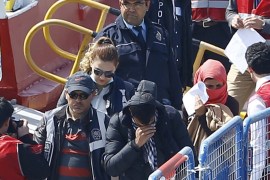 Deported refugees arrive in Turkey as part of EU deal

Around 200 arrive smoothly as part of deal aimed at stemming crisis but rights fears persist over future asylum seekers. 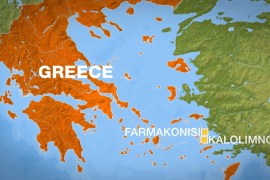 Authorities recover bodies of 43 people, including 17 children, after two refugee boats capsize in the Aegean. 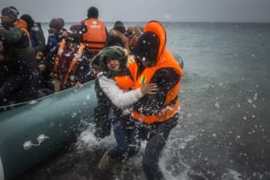 Refugees, including children, drown off coast of Turkey

At least 34 bodies have washed up on shore on country’s Aegean coast after boats apparently capsized.