Relatives and tribal elders in southeastern Afghanistan are demanding an investigation into the killing of 17 people by US drones this week, claiming that the air strikes hit civilians, not members of armed groups.

US army officials said on Thursday that two air strikes in Paktika province, near the Pakistani border, had only targeted fighters, without any evidence of civilian casualties.

Afghan officials confirmed to Al Jazeera that 17 people had been killed in Wednesday’s strikes in Gomal district, but added they all had links to the Taliban.

READ MORE: Most killed by US drones were not targeted

Yet, local leaders and relatives insisted on Saturday that all of those killed were innocent civilians.

“We demand an investigation into the brutal killings of these innocent people,” Nimatullah Baburi, a deputy of the Paktika provincial council, told Al Jazeera.

“I know them personally and their families too. They are in no way affiliated with the Taliban,” he added.

“Those men were doing low-paid jobs to feed their families. All of them were civilians”.

Bahadur Noorullah Khan, a clerk working in the district office, was one of the 17 people killed in the raids.

He left behind a wife and two children.

“Who is going to feed them?” Khan’s wife asked. “Bahadur was the sole breadwinner of our family, now where am I going to go with my children?” He was innocent. He was never involved with militants. This case should be investigated.”

Another man killed in the air strikes was 37-year-old Hussain, who like many Afghans goes by one name.

“This man got married a year ago,” his friend Mohammed Hassan told Al Jazeera.

“Innocent people die every day in our country. No one asks about them … These drone strikes have taken lives of innocent people since the beginning of time.”

However, Aminullah Shariq, the governor of Paktika province, told Al Jazeera on Saturday only Taliban-affiliated people were killed in the attack.

“We’ve been in touch with the Americans and after all the investigations and inquiries, we’ve come to the conclusion that all people killed in the strike were linked to the Taliban,” he said.

“We will continue to support the US in their operation as both of us have the same aim: to defeat the militants.”

His comments came after Brigadier General Charles Cleveland, spokesman for the US military in Afghanistan, said in a statement on Thursday: “We can confirm that the US conducted two counterterrorism strikes in Paktika on Wednesday afternoon.

“There was no evidence to indicate that there were any civilian casualties at all.”

“We witness that the Afghan police and army say that the victims were Taliban, or al-Qaeda militants.

“It’s not clear why they insist on this but it’s always the same scenario after drone strikes, which is why most of the civilian victims of the strikes remain nameless and faceless.”

The US has intensified drone operations in the country since Islamic States of Iraq and the Levant (ISIL, also known ISIS) loyalists started appearing in Afghanistan.

According to the London-based Bureau of Investigative Journalism, Afghanistan is the “most drone-bombed country in the world” with at least 1,368 people killed since 2015. 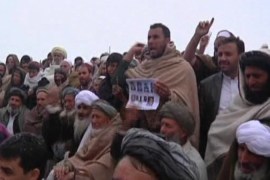