A banned group in Bangladesh tied to al-Qaeda has claimed responsibility for the killing of a student who had openly professed his atheism.

Nazimuddin Samad, a 28-year-old law student, was hacked to death by three men riding on a single motorbike as he walked with a friend in central Dhaka on Wednesday night, Bangladeshi police said.

It was the latest incident in a series of targeted killings of secular activists and bloggers in the country.

According to SITE Intelligence monitoring group, Ansar al-Islam, the Bangladesh division of Al-Qaeda in the Indian Subcontinent, or AQIS, said in a statement posted online on Friday that its members carried out the attack in “vengeance”.

It said that Samad “abused” God, Prophet Muhammad and Islam.

It cited three examples from Samad’s Facebook page without giving the text of his posts.

“This operation was conducted to teach a lesson to the blasphemers of this land whose poisonous tongues are constantly abusing Allah, the religion of Islam and the Messenger under the pretext of so-called freedom of speech,” the statement said. It could not be verified independently.

Samad was an outspoken atheist in the Muslim-majority country and voiced support for a 2013 movement to demand capital punishment for war crimes involving the country’s independence war against Pakistan in 1971.

He had only recently arrived in Dhaka from the northeastern city of Sylhet to study law at Jagannath University.

Al Jazeera’s Tanvir Chowdhury, reporting from Dhaka, said Samad was the seventh secular activist who has been killed in recent times.

“The men on the motorbike first hit him with machetes. Then they shot him to make sure he was dead,” Chowdhury said.

Last year, assailants hacked to death at least four atheist bloggers and a secular publisher in a long-running series of killings of secular activists.

Police arrested members of a banned group called the Ansarullah Bangla Team over those murders, although none has yet been prosecuted.

Imran Sarker, who heads the Bangladesh Bloggers Association, an online secular activist group, said Samad had joined nationwide protests in 2013 against leaders accused of committing war crimes during the country’s war of independence.

“He was a secular online activist and a loud voice against any social injustice,” Sarkar said.

“He was against Islamic fundamentalism.” 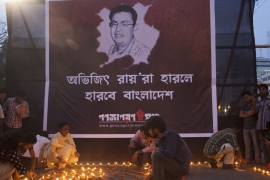