More than 300 staff at a cement factory east of Damascus have been kidnapped after an attack earlier this week by Islamic State of Iraq and the Levant (ISIL, also known as ISIS), Syrian state TV said.

Hundreds of employees at the Al Badia Cement company were taken by ISIL fighters from a factory in the town of Dumayr, 50km east of the Syrian capital, the report quoted the industry ministry as saying on Thursday.

It added the workers’ employer had lost all contact with them.

However, there were conflicting reports on Thursday about the number of people missing, with local sources telling Al Jazeera that the number was far less than 300.

Al Jazeera’s Jamal Elshayyal, reporting from Beirut in neighbouring Lebanon, said rebels belonging to a rival group managed to secure the release of most of those kidnapped.

“Sources said ISIL initially killed or beheaded 10 of those who were taken, accusing them of espionage, and that fewer than 100 of them remained in captivity. The conflicting reports show the lack of clarity on the ground,” Elshayyal said.

Residents in the nearby area of Giraud, however, said they saw ISIL vehicles carrying nearly 125 workers and heading to the town of Tel Dkoh, which is controlled by the group, local official Nadeem Krizan told Syria’s official news agency SANA. He did not account for the other workers reportedly seized.

The Syrian Observatory for Human Rights said “dozens” of staff had disappeared, while a plant administrator put the figure at 250.

The Britain-based monitor, which relies on a network of activists inside Syria for information, added the ISIL attack on Dumayr killed at least 20 Syrian soldiers and allied paramilitary fighters.

A resident of Dumeir, 50km east of the Syrian capital, told the AFP news agency that contact with family members had been lost “since noon on Monday”.

“There is information that the workers might have been kidnapped by Islamic State (ISIL) and taken to an unknown destination,” Rami Abdel Rahman, the Observatory’s head, told the DPA news agency.

The cement factory lies outside Dumayr, which has seen fierce battles between government forces and ISIL fighters inside the town.

A Syrian security source told AFP that ISIL also tried to seize a nearby airbase and power plant from the government, without succeeding.

ISIL’s latest attacks near Damascus are seen as retaliation for military setbacks suffered by the group elsewhere in Syria.

Last month, Syrian regime forces – backed by Russian warplanes – drove ISIL from the strategic and ancient city of Palmyra, which the fighters had controlled for 10 months. 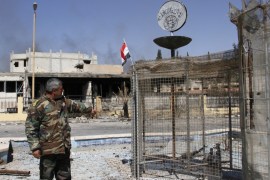 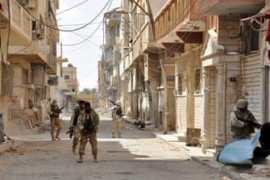 Children and pregnant woman among those killed in Kurdish area while ISIL fighters raid power station near Damascus. 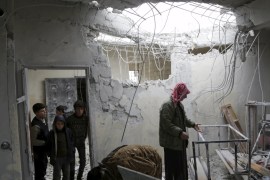