A Myanmar court has freed 69 jailed students in the first wave of detainee releases after Aung San Suu Kyi pledged that the release of activists and political prisoners would be the first priority of her new government.

Suu Kyi guided the National League for Democracy party (NLD) to a landslide win at the polls in November and a confidant Htin Kyaw was sworn in as the country’s new president after more than five decades of military rule.

The routine jailing of dissidents by the former junta stirred an international outcry and support for the pro-democracy movement. Suu Kyi spent 15 years under house arrest, and many current NLD MPs served time in prison.

According to local media reports, the political prisoners were among a more general amnesty for around 4,000 prisoners across the country.

“You 69 are all freed now without charges,” said Chit Myat, township judge at the Tharrawaddy court, ending the prosecution of those students over an education protest that was crushed in a violent police crackdown in March 2015.

Suu Kyi was sworn in as minister of foreign affairs, education and energy but the upper house of the Myanmar parliament passed a proposal to create a new position as “state adviser” that will give her a powerful role in running the country.

In her first statement since assuming the new, broadly defined role, Suu Kyi said that she was “going to try… for the immediate release of political prisoners, political activists and students facing trial related to politics”.

According to the Assistance Association for Political Prisoners, 90 political prisoners were in jail and more than 400 activists were facing trial as of February.

The vast majority were arrested before last November’s elections.

Among those held were 40 students facing charges including unlawful assembly and rioting over education reform protests that were violently broken up by police in the central town of Letpadan in March 2015.

Another 30 students are on bail but facing similar charges. 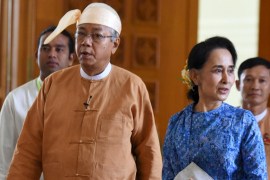