Lawyers in Egypt plan to appeal against the move by President Abdel Fattah el-Sisi to sack the country’s top auditor who reported that tens of billions of dollars had been lost to government corruption.

Hesham Genena, the former head of Egypt’s Central Auditing Organisation (CAO), was fired on March 28, months after alleging in a TV interview that an audit found that corruption had cost the state an estimated $75bn.

Genena was appointed head of CAO in 2012 by former president Mohamed Morsi, a member of the now-outlawed Muslim Brotherhood. Morsi was overthrown by Sisi in July 2013.

Following Genena’s allegations, Sisi appointed a fact-checking committee to look into the issue. On January 12 – two weeks after its formation – the committee accused the auditor of exaggerating the figures and misleading the public.

Last July, the president issued a decree giving himself powers to sack the heads of regulatory agencies, raising questions about the independence of such groups.

“The decree issued by the president does not give him the authority to sack [Genena],” said Osama el-Shishtawy, founder of the National Movement for the Defence of Hesham Genena, an independent group made up of at least 200 lawyers.

Shishtawy told Al Jazeera earlier this week that lawyers met Genena at his house and decided to file an appeal in Egypt’s Supreme Administrative Court.

“We agreed on forming an agenda to file an appeal on the dismissal sometime next week,” he said.

According to Article 215 of Egypt’s constitution, regulatory agencies, including the CAO, “shall be technically, financially and administratively independent”.

“The constitution clearly states that you can’t dismiss the head of the Central Auditing Organisation,” Kareem Abdel Rady, a lawyer and researcher for the Arab Network for Human Rights Information, told Al Jazeera.

In December, Genena was cited in a news report as saying that the cost of corruption in 2015 alone exceeded $75bn. But the auditor later said his statements had been misreported, noting the $75bn figure was for the 2012-2015 period.

Genena said the CAO report was done in cooperation with the Ministry of Planning – and that the planning minister was aware of its findings.

Al Jazeera made several attempts to contact the Ministry of Planning for comment without receiving an answer.

Al Jazeera contacted the UNDP office in Cairo but its representative referred to a gag order issued by the public prosecutor in January on any coverage of the 400-page report’s findings.

Following his dismissal, Genena was reportedly placed under house arrest by Egyptian authorities, but this was denied by a source close to Genena.

“There were no investigations of any kind held with Genena that would lead to any decision of a house arrest,” the source told Al Jazeera on condition of anonymity, fearing reprisals.

At the time of publication, Genena had not been questioned over alleged wrongdoing by any Egyptian authority, according to the source.

“He wasn’t summoned to the general-prosecutor or the public prosecution, nor was he asked to go.”

Genena’s statements on corruption and his subsequent firing have been widely discussed in Egyptian media.

TV presenter Amr Adib speculated that Genena’s sacking had to do with disclosing information harmful to national security.

“Genena will live the rest of his life caught up in court cases,” Adib said.

A year before his dismissal, Genena alleged in a TV interview that members of Egypt’s Interior Ministry and public prosecution were trying to defame him by making accusations that he belonged to the Muslim Brotherhood.

“Goebbels under Hitler depended on this method. Lie, then lie, until all the others believe you,” Genena told Egypt’s Ten TV network in April 2015.

Since his election in 2014, Sisi has promised to fight corruption in Egypt. In 2015, the country was ranked 88 out 168 in Transparency International’s rating of public corruption.

Asked whether appealing against the president’s decision to fire Genena would bring negative repercussions, Shishtawy said that he was speaking out in favour of the country – and its president.

“[Sisi] is a man that’s fighting corruption, so I don’t think we’re doing anything against the state at all,” he said. 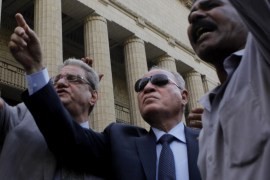 Ahmed al-Zend ‘relieved of position’ after his controversial remarks about imprisoning the prophet go viral. 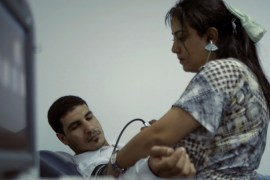 A look at the funding crisis in Egypt’s health service, from cost of medication to organ sales and “patients for hire”.