Besieged towns in Syria are facing “critical” humanitarian situations with aid workers trying to help their inhabitants being bombed in air strikes and targeted by snipers.

Doctors Without Borders (MSF) reported on Friday that in the encircled East Ghouta district of Homs, two field hospitals, a school, and inhabited buildings had been bombed in the past week, killing at least 38 people and wounding 87 others – including five medical staff.

“The catalogue of horror continues virtually unabated in many besieged areas,” Dr Bart Janssens, MSF director of operations, said in a statement.

“We reiterate our call for an end to indiscriminate or targeted violence on civilians or civilian areas.”

READ MORE: US should not arm Syrian rebels

East Ghouta remains under the control of armed groups fighting the Syrian government.

Charlotte Morris, an MSF spokeswoman, told Al Jazeera that the Syrian military was suspected of carrying out the deadly air raids.

In Zabadani, outside the capital Damascus, the surrounded town’s only remaining medical doctor and a member of a rescue team were killed by a sniper after treating a patient, MSF said.

Over the past few weeks, several areas in the Damascus region have been shelled, including al-Marj, Deir al-Safir and Zebdine.

MSF said in Madaya, five people died – including two children – who could have been saved if medical evacuations had been allowed.

The Daraya and Duma areas, meanwhile, remain completely blocked from any humanitarian access.

According to the United Nations, more than 250,000 people have been killed and millions have fled their homes since Syria’s conflict erupted in March 2011.

The UN said it is planning to begin a large-scale evacuation of wounded and sick people from four besieged Syrian towns next week.

Jan Egeland, who heads a UN-backed humanitarian task force for Syria, said “a very major” medical evacuation was planned for Madaya and Zabadani, both blockaded by the government and its allies, and Fuaa and Kafraya, besieged by rebels in Syria’s northwest. 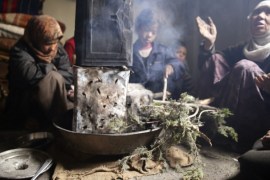 Aid trucks have entered five besieged areas as the UN plans to meet for a second time to discuss humanitarian aid. 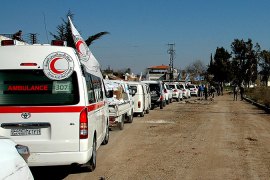 Who is protecting medical staff in Syria?

Report says government forces are behind most attacks on hospitals, doctors and nurses. 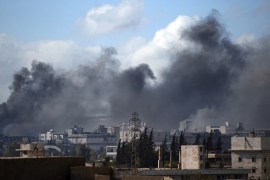 Report: Healthcare under fire in Syria