At least 62 people have been killed and about 83 wounded in a wave of suspected Islamic State of Iraq and the Levant (ISIL) attacks on military posts and civilian neighbourhoods across Iraq, officials said.

In the worst of Monday’s attacks, at least 26 troops were killed when a car bomb went off in the city of al Baghdadi, which is west of the strategically vital Anbar province and near Ain al-Asad airbase.

A police source from Salahuddin province, north of Baghdad, told Al Jazeera that at least six pro-government militia fighters were killed and 18 others injured in two separate ISIL attacks there.

Thirteen other members of the security forces were killed in an attack on a military barracks east of Fallujah.

In a suicide blast that targeted the Iraqi prime minister’s convoy as it travelled through the Meshahda area of Baghdad, at least three pro-government militia fighters were killed and 10 wounded.

Three people were killed and 12 wounded when a suicide bomber blew himself up at a security checkpoint north of Baghdad. The incident happened near Al-Muthana bridge, which links the capital with northern towns and cities such as Samara and Tikrit.

In the southern city of Nassiriyah, police sources said at least five civilians were killed and 23 wounded in a bombing at a local restaurant in Tel Al-Laham town.

In the centre of Basra city, at least five civilians were killed and 11 wounded after a parked car exploded at an intersection.

The series of bombings came as Iraqi forces continued a campaign to wrest back control of parts of Anbar province and Mosul city – which was seized by ISIL in 2014.

Iraq’s army said in a statement that its operations against ISIL in Mosul continued on Monday, having been on pause for several days.

It also said that it was advancing towards the ISIL-held town of Makhmour, south of Mosul, as a US-led coalition backed it with air support. 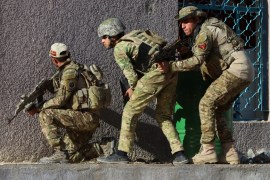 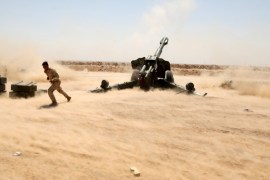 Car bomb attack in Anbar province kills two generals and three others as fighting rages between ISIL and Iraqi forces. 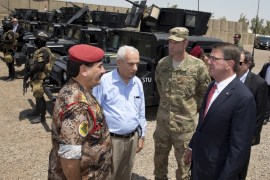 Iraq forces suffer casualties as they advance in Anbar