At least 63 people have been killed and 34 injured after flash floods ravaged parts of northwest Pakistan, including the Pakistan-administered Kashmir.

“There are 30 people stranded by a landslide in the Kohistan Valley where we have sent a helicopter to rescue them,” Khyber Pakhtunkhwa disaster management official Yousuf Zia told Reuters news agency.

One of the worst-affected districts was the Swat Valley, northwest of the capital, Islamabad, where 121mm of rain fell on Sunday, the Meteorological Department said.

Landslides caused widespread damage to roads and communication infrastructure in the Pakistan-administered Kashmir as well.

The heavy rain is now expected to move northeast towards northern India, although more isolated storms were expected in northern Pakistan, the Meteorological Department said.

“All roads leading to villages and other areas have been blocked … There is no movement at all,” Khalid Khan, a courier company owner in Shangla district of Khyber Pakhtunkhwa, told AFP, adding that local hospitals lacked the facilities to deal with the injured.

During the rainy season last summer, torrential downpours and flooding killed 81 people and affected almost 300,000 across the country and in Kashmir. 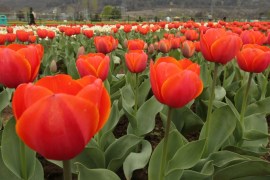 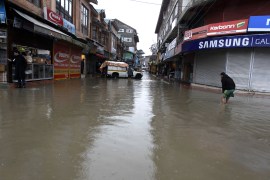 At least 16 people killed and hundreds evacuated as India-administered Kashmir is struck by torrential rains.