With sizzling temperatures claiming more than 300 lives this month in India, officials have banned daytime cooking in some parts of the drought-stricken country in a bid to prevent accidental fires that have killed nearly 80 more people.

The website of the NDTV television channel said cooking would not be allowed in villages in the eastern Bihar state between 9am and 6pm during the summer months and those who violated the order could be jailed for up to two years.

“We call this the fire season in Bihar,” a state-disaster management official said. “Strong, westerly winds stoke fires which spread easily and cause great damage.”

Bihar took the decision after accidental fires exacerbated by dry, hot and windy weather swept through shantytowns and thatched-roof houses in villages and killed 79 people.

People were instead told to cook at night.

Among those who died were 10 children and five adults killed in a fire sparked during a Hindu prayer ceremony in Bihar’s Aurangabad district last week.

Many politicians criticised the move, according to the paper.

“[The] government should instead focus on increasing the number of fire tenders and repairing those which are not functional,” said Sanjay Mayukh, a local politician from the opposition BJP.

The NDTV report quoted Satender Bind, a resident of Jehanabad district who lost his hut in a recent fire, as saying: “It sounds fine but I wonder how many people will follow it. There are practical difficulties. But yes, I did lose my home in a fire and it started from someone’s cooking.”

IN PICTURES: Devastating drought in Marathwada

Danish Rizwan, a spokesman for the centre-right Indian People’s Front (HAM), said that “the main reason behind massive fire in rural areas is that huts have rooftops of straw”, urging the government to provide them with alternative housing rather than ban cooking in the day hours.

Much of India is reeling under a weeks-long heat wave and severe drought conditions that have decimated crops, killed livestock and affected at least 330 million Indians – many of them left without enough water for their daily needs.

Rivers, lakes and dams have dried up in parts of the western states of Maharashtra and Gujarat, and overall officials say that groundwater reservoirs are at just 22 percent capacity.

In some areas, the situation is so bad the government has sent tankers of water for emergency relief. Monsoon rains are still weeks away, expected to start only in June.

At least 300 people have died of heat-related illness this month, including 110 in the state of Orissa, 137 in Telangana and another 45 in Andhra Pradesh where temperatures since the start of April have been hovering around 44C.

That is about 4-5C hotter than normal for April, according to state meteorological official YK Reddy. He predicted the situation would only get worse in May, traditionally the hottest month in India.

Huge numbers of farmers have migrated to nearby cities and towns in search of manual labour, often leaving elderly and young relatives behind in parched villages.

This week, more than 150 leading Indian economists, rights activists and academics expressed their “collective anxiety about the enormous suffering of the rural poor” in an open letter to Narendra Modi, the prime minister.
This is the second consecutive year southern India has suffered from a deadly heat wave, after about 2,500 people died in scorching temperatures last year.
Source : Al Jazeera, News Agencies 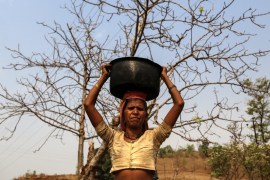 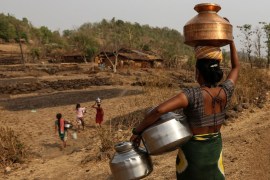