A suicide car bomb has exploded outside the home of the police chief of Aden, Yemen, the latest in a series of attacks against government officials in the city, reports said.

General Shallal Shayae escaped unharmed but at least two people were wounded when the bomber detonated a car packed with explosives, an official told the AFP news agency.

The attack ended a period of relative calm in Yemen’s second city, the temporary base of President Abd-Rabbu Mansour Hadi’s government.

It came after government forces, backed by a Saudi-led coalition, seized a key southeastern city, Mukalla, and a nearby airport and oil facilities from al-Qaeda, ending a year-long occupation by the group.

A witness said the bomber was stopped at a checkpoint on the perimeter of a compound around the general’s house when he blew himself up.

There was no immediate claim of responsibility for the attack. Shayae has survived several similar attacks in the past.

In February, suspected al-Qaeda members fired on a convoy carrying Shayae and the governor of Aden, Aidarus al-Zubaidi. They escaped unharmed.

Shayae and Zubaidi also survived a car bombing that targeted their convoy in Aden on January 5, killing two of their guards.

Armed groups have gained ground in Aden since forces loyal to Hadi, and backed by the Saudi-led coalition, drove Houthi rebels, backed by Iran, out of the city in July last year. 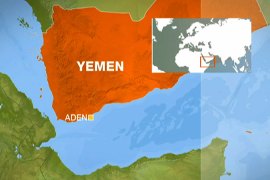 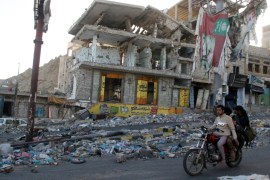 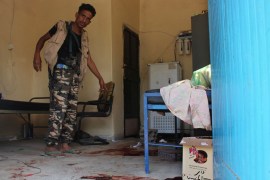 Attackers enter Catholic retirement home in the port city of Aden before opening fire and killing at least 16 people.