Juba, South Sudan – South Sudanese rebel leader Riek Machar has returned to the capital after two years of war in what is seen as a step towards ending a conflict that has killed tens of thousands.

After landing at Juba airport on Tuesday, Machar was inaugurated as vice president by President Salva Kiir ahead of forming a unity government.

“Our people are tired of war and they need peace, now,” Kiir said. “Together we can accomplish far more than when we are divided. Our strength lies only our unity.”

About 2.3 million South Sudanese have been driven from their homes since war erupted in December 2013, plunging the country into a humanitarian crisis.

Kiir and Machar signed a peace deal in August, but fighting intensified in some areas afterwards.

“The war was vicious. We lost a lot of people in it, and we need to bring our people together so they can unite, reconcile, and heal the wounds,” Machar said. “As long as there is political will, we can overcome all of these challenges and all of these obstacles.”

Almost 200,000 live in camps for displaced people, protected by UN peacekeepers. In one camp in Juba, people ran through the streets celebrating after Machar’s arrival.

‘We are all South Sudanese’

“The return of Dr Machar will change many things,” Chotlith Jany, a youth leader, told Al Jazeera. “People believe that all the fighting that took place, all the suffering … will end.”

Machar’s return had been expected last week, but a series of delays by the government and rebels prevented it.

If peace holds, the unity government will now have to set about repairing an economy near the point of collapse. Fuel prices have plunged on the global market, depriving the country of its main source of income.

South Sudan’s diplomatic relationships have also been strained by the conflict.

Last week, the government attempted to arrest an official from the body monitoring the peace deal, the Joint Monitoring and Evaluation Commission (JMEC).

Diplomatic sources told Al Jazeera that security officers entered a meeting of foreign ambassadors and diplomats and tried to arrest Aly Verjee, the Deputy Chief of Staff at JMEC.

“A national security officer was sent to arrest him and take him to the airport,” Michael Makuei, the information minister, said, adding that South Sudan was a sovereign country and had the right to arrest him.

The ambassadors prevented Verjee’s arrest, but he subsequently left the country.

Speaking at the presidential residence after Machar’s return, Kiir apologised to the people of South Sudan, and the international community.

“Thank you for the long patience,” Kiir said. “We are all South Sudanese.” 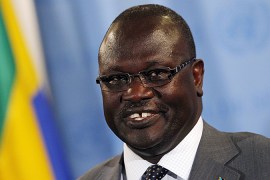 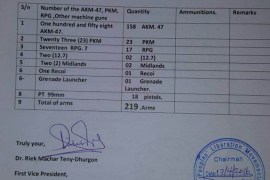