The Trump show now packs up its tent after a successful run in five north eastern states and heads to Indiana.

On Tuesday, he secured a clean sweep in Pennsylvania, Maryland, Rhode Island, Connecticut and Delaware.

In theory things are about to get much harder.

In the last 72 hours, the two other Republicans still in the race, Texas Senator Ted Cruz and Ohio Governor John Kasich announced that they are joining forces in an anti-Trump alliance.

While neither can now secure the nomination themselves before the Republican Party convention in July, they want to stop Donald Trump doing just that. They want the Cleveland gathering to be a battle rather than a coronation.

So the plan is where one is the main challenger to the Republican frontrunner, the other will essentially leave the state to give him a clear run. The first real test will be in Indiana in a week’s time. Cruz is Trump’s closest challenger there. The situation will be flipped in Oregon and New Mexico.

But there are problems here.

Firstly, there is the arrogance that both campaigns think they can direct their own supporters how to vote and they will simply fall into line. Voters don’t think the same way politicians do, they don’t spend time worrying over strategy and endorsements. They vote for who they like, who speaks to their values and concerns. And they won’t like being told what they should do.

Then there is the assumption that if Kasich isn’t competitive, then the anti-Trump vote will automatically transfer to Cruz and vice versa. In reality, there is very little overlap between the two. Cruz has argued his party needs to put a true conservative in to the battle for the presidency; someone who is not part of the Washington elite; someone who won’t back down or be forced to compromise his ideals. Kasich is considered more pragmatic; a man who believes his Washington experience is an asset and seeks to work with the other side (the Democrats) where possible. There is actually more chance of a Cruz supporter switching his vote to Trump that to Kasich.

And then finally there is the big propaganda victory that the two politicians just handed Donald Trump. For weeks he’s been arguing that the battle against him is rigged and that the Republican Party establishment is actively working against him. Now he has a clear example of how things are being engineered behind the scenes.

If that wasn’t bad enough, within 24 hours of the pact being announced, John Kasich seemed to undercut the whole thing by telling his supporters in Indiana to still vote for him. This let Donald Trump stand on the stage on Tuesday and claim it was yet another example of politicians promising things and failing to deliver. He couldn’t have scripted it better himself.

Trump is leading the polls in Indiana. Unusually, he has committed himself to spending several days straight in the state. He knows its importance even though he told reporters he now believes the race is over and he considers himself the presumptive nominee.

Way back at the beginning of the Republican contest, there were many calls for the anti-Trump forces to unite around one candidate. But too many thought they would be that figure. So they stayed in the race. One by one they fell away. Chris Christie, Jeb Bush, Carly Fiorina, Marco Rubio. They’ve all departed.

Even a month ago, if this had simply developed into a one against Trump race, there was a chance it could have worked. The Republican establishment would have avoided its biggest nightmare, a Trump candidacy.

Now it may be too late. 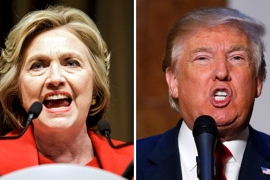 US election: Five US states vote in primaries 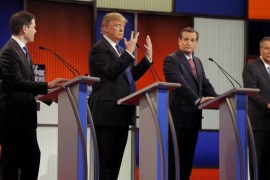 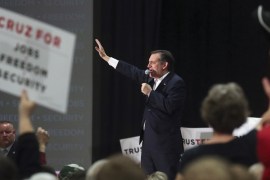 Cruz wins all 14 delegates in northwestern state, moving to within 185 delegates of rival Republican candidate Trump.