Mukalla, Yemen – Yemeni officials say that they have captured al-Qaeda’s last stronghold along Yemen’s southern coast, two days after forcing the group from major cities including Mukalla, the provincial capital of Hadramout province.

Army commanders and residents told Al Jazeera on Tuesday that pro-government forces had entered the city of Ghayl Bawazer, some 800km from the capital Sanaa, but were fearful of ambushes and reprisal attacks by the armed group.

Yemeni forces backed by the coalition forces launched a military campaign against al-Qaeda in the oil-rich province on Saturday, almost a year after the group cashed in on nationwide chaos and gained control of the coastal region.

The forces clashed with al-Qaeda in many areas outside the port city of Mukalla before the group decided to pull out with the military closing in.

The exiled governor of Hadramout, Major General Ahmed Saeed Bin Bourek returned to the city on Tuesday, and told Al Jazeera that he hoped life would return to normal.

“We want peace and government offices and facilities like passport department [to] reopen. Nothing more than that,” Abdullah said, as he began slicing up fish at the city’s fish market.

Known for its thick plantations, Ghayl Bawazer had long been a safe haven for al-Qaeda even during the reign of the former president Ali Abdullah Saleh. But with Ghayl Bawazer now under government forces’ control, al-Qaeda has lost its last major stronghold in the province.

Meanwhile, in Mukalla, more armed vehicles stationed around vital government and private installations such as the presidential palace, military camps and main hospitals, banks and the post office.

Al-Qaeda’s sudden demise from the city has triggered speculation about a secret deal between the group and local dignitaries.

Army generals who commanded the operation refuse to recognise al-Qaeda’s departure as part of any deal, saying that the group suffered a crushing defeat after fierce clashes with their forces.

“We fought them for six hours in Al Eoun. Al Qaeda was shocked by the big number of forces who stormed their territories from three sides,” an army field commander told Al Jazeera on condition of anonymity because he was not authorised to brief reporters.

“I can say for sure that we killed less than 150 al-Qaeda during battles in Al Eoun and airport. I have no [idea] about those militants who might have been killed by warplanes while fleeing the city,” the official said.

Yemen has been torn apart by conflict for the past two years. More than 6,100 people have died – half of them civilians – since a Saudi-led coalition launched air strikes on Yemen in March 2015, according to the UN. 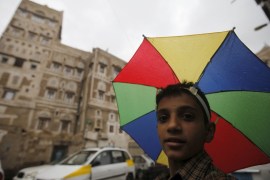 Yemenis have not lost hope

Yemen could have been spared all this misery if armed groups weren’t blinded by their greed and ego.