Tens of thousands of supporters of the influential Shia cleric Muqtada al-Sadr have gathered in the Iraqi capital, calling for economic and political reforms to end corruption.

Sadr had given Abadi his backing on the condition that he would involve Sunnis in the government, stop corruption and appoint cabinet ministers with better qualifications.

“I want the prime minister to continue his reform plan with no fear of political pressure,” he said.

Last month, Abbadi tried to meet those demands when he presented a list of technocrats, instead of party-affiliated politicians, to form a new cabinet.

When Abbadi put forward that list of nominees, Sadr called off the protests. But the move faced major resistance from powerful parties that rely on control of ministries for patronage and funds.

Iraq’s government has been based on a quota system since 2003 that empowers politicians based on ethnic and religious grounds.

More than 100 MPs staged their own sit-in last month and voted to replace the parliamentary speaker.

Some also fought over whether the Kurdish president should be replaced or not.

Though Sadr has managed to mobilise thousands of Iraqis, analysts do not believe Tuesday’s protests will have much effect on the government.

“I don’t think this will have any effect on the government’s position,” Saad Jawad, a professor at the London School of Economics, told Al Jazeera.

“Unfortunately, nobody is doing anything. They have not been listening to the protests.” 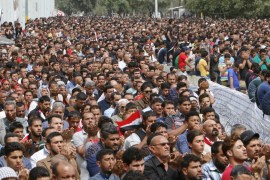