Unidentified attackers have hacked a university professor to death in Bangladesh, police say, adding that the assault bore the hallmarks of previous killings of bloggers and online activists.

Police said Rezaul Karim Siddique, a 58-year-old English professor, was attacked from behind with machetes as he walked to the bus station on Saturday from his home in the country’s northwestern city of Rajshahi.

Two or three assailants rode up on a motorcycle and attacked Siddique, slitting his throat and hacking him to death, police official Golam Sakline said, adding that an investigation had been launched.

Al Jazeera’s Maher Sattar, reporting from Dhaka, said it was unclear why Siddique was targeted.

“The police say that the manner of his murder was very similar to the others and they believe that it is a religiously motivated attack,” he said.

“His colleagues say that Siddique had never been publicly critical of Islam unlike the seven others murdered in the same way.

“He had been a cultural activist, not someone who had been critical of religion, and his cultural activities were seen as unreligious. He launched a music school in a very conservative village, so the criteria for targeting people appear to have been broadened.

“There is now concern among liberals as to whether it’s possible to express yourself and your beliefs any more with the same freedom that they had in the past.”

Teachers and students at Rajshahi University staged a demonstration on campus after the murder.

Homegrown assailants have been blamed for a number of murders of secular bloggers and online activists since 2013, the most recent being in the capital Dhaka early this month.

Police say that in each of the attacks unidentified assailants hacked the victim to death with machetes or cleavers.

Eight members of banned Ansarullah Bangla Team, including a top cleric who is said to have founded the group, were convicted late last year for the murder of atheist blogger Ahmed Rajib Haider in February 2013.

The recent killings have sparked outrage at home and abroad, with international rights groups demanding that the secular government protect freedom of speech in the Muslim-majority country.

Ansar al-Islam, a Bangladesh branch of Al-Qaeda in the Indian Subcontinent, this month claimed responsibility for the murder of 26-year-old Nazimuddin Samad, a law student who was killed on the streets of Dhaka, according to US monitoring group SITE.

Police, however, blamed the Ansarullah for the murder. 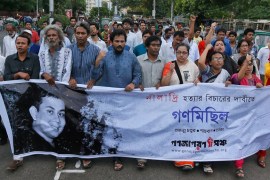 As harsh laws and a string of murders target Bangladeshi bloggers, 101 East meets those risking their lives.