United States President Barack Obama landed in Saudi Arabia on Wednesday in what is being billed as an effort to end wars in Syria and Yemen and ease tensions between Washington and Riyadh.

Obama will meet King Salman and will attend a summit on Thursday with leaders of six Gulf Cooperation Council (GCC) countries, at which he will be joined by US Defense Secretary Ashton Carter and Secretary of State John Kerry.

The US-Saudi relationship has been badly strained by a deal between Western nations and Iran to curb its nuclear programme, a move that Riyadh and its allies feared would embolden Tehran in the region.

“We stressed that if Iran wants to have normal relations with GCC states it has to change its policies and to abide by the good neighbourhood principle and to refrain from interfering in the affairs of GCC states and the countries of the region,” the Saudi Foreign Minister Adel Al-Jubeir said earlier this month.

Syria will also be high on the agenda, with both the US and Saudi Arabia wanting President Bashar al-Assad to go, and both backing opposition groups fighting him. The Islamic State of Iraq and the Levant (ISIL, also known as ISIS) – and the efforts of a US-led coalition backed by Riyadh to fight it – will also be discussed.

Separately, Riyadh leads a coalition that more than a year ago began a campaign of air strikes to support Yemen’s government in a battle against Iran-backed Houthi rebels.

Bilal Saab, an analyst with the Atlantic Council, said he expects blunt talk from Obama.

“It’s his style. he’s been saying some frankly necessary things to Gulf partners for a long time,” Saab said.

“I’m not sure any US president has ever told the Gulf states [they] should be more worried about internal reform, and about internal security, than worrying about what you see as an existential threat [from] Iran.”

READ MORE: Riyadh ‘satisfied’ with US assurances on Iran deal

Another bone of contention overshadowing the visit is proposed US legislation that could pave the way for the Saudi state to be sued in US courts over the September 11 attacks.

Fifteen of 19 hijackers on that day were Saudi citizens. Saudi government complicity in the attacks, though, has never been proved.

Riyadh has threatened to sell $750bn worth of US assets if the proposed bill passes.

After he leaves Saudi Arabia, Obama will travel to Germany and Britain. 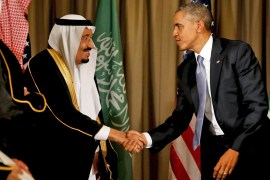 US president and defence chief on a two-day trip to the Gulf to talk counterterrorism and regional security threats. 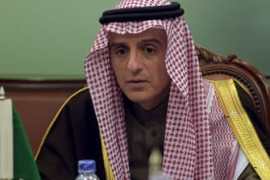 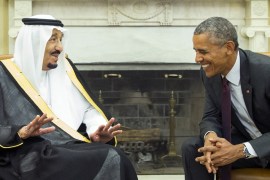 Riyadh ‘satisfied’ with US assurances on Iran deal

Saudi FM says leaders of the two countries have agreed on ways to counter Iran’s “negative activities” in the region.