Authorities were struggling to get aid to parts of southern Japan after at least 110,000 people were forced from their homes in the wake of two powerful earthquakes.

Prime Minister Shinzo Abe said on Monday he wanted to officially designate the southern region a disaster area in a move that would allow the government to spend more on reconstruction.

About 30,000 rescue workers were scouring the rubble for survivors and handing out food to those unable to return to their homes after the quakes that struck Kyushu island from Thursday.

About 80,000 homes in Kumamoto prefecture – the worst hit area – still did not have electricity on Sunday, the Ministry of Economy, Trade and Industry said.

The US military prepared to join relief efforts as many areas were cut off by landslides and damage to roads and bridges. Forecasts for heavy rains, which would make collapsed buildings more unstable, added to the urgency of the searches.

Some evacuees said that food distribution was just two rice balls for dinner.

“We are doing our best,” Abe told MPs when challenged by the opposition over his handling of the relief effort. “We are striving to improve living conditions for the people who have sought refuge.

“Today, tomorrow, the day after tomorrow, we will be working toward a full recovery.”

Gradually, some roads were being reopened, and men in security guard uniforms were helping to direct traffic in drizzly weather.

Many whose homes were not seriously damaged looked for shelter as the area was rocked by more than 500 aftershocks.

Local media said most of those missing were from Minamiaso, a mountain village southwest of 1,592-metre Mount Aso, the largest active volcano in the country.

Earthquakes on successive nights struck Kumamoto city and the surrounding region late last week. Nine people died in the first earthquake, and 33 in the second.

The parts of Kyushu affected by the quake include technology hubs and other industrial areas, and the disruptions to transport and logistics were expected to ripple through the economy.

Other companies, including Sony, have announced stoppages at some of their factories in Kyushu. 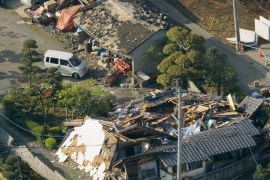 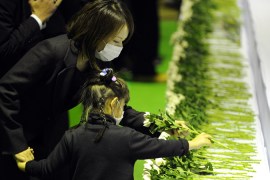