Ted Cruz has won all 14 delegates at stake in the western US state of Wyoming, handing rival Donald Trump, who made little effort to win the rural state, another loss in a series of defeats in Western states.

Cruz is trying to prevent Trump from obtaining the 1,237 delegates needed to secure the Republican nomination at the July convention in Cleveland. His win further narrowed the gap in the race for the party’s nomination.

By continuing to make small wins, Cruz is gaining ground on the New York real estate baron, who has thus far failed to shift his focus on the local-level campaigning necessary to win delegates.

According to a delegate count by the Associated Press news agency, Trump still leads the overall delegate race with 744 delegates. Cruz has 559.

That means Trump must win nearly 60 percent of those remaining before the party’s political convention in July.

Trump has been critical of the process, calling it “rigged” while speaking at a rally in Syracuse, New York.

He has repeatedly complained about Colorado state, which awarded all 34 of its delegates to Cruz despite not holding a popular vote.

Trump said his supporters are becoming increasingly angry with states such as Wyoming and Colorado.

“The bosses took away their vote, and I wasn’t going to send big teams of people three, four months ago, have them out there.”

Wyoming does not hold a primary vote.

Instead, 475 party activists convened in Casper, Wyoming on Saturday to hold a state convention and award 14 delegates.

Previously, 12 other delegates had been designated at county-level conventions.

Cruz won 10 of those, with one going to Trump and another being elected as “unbound”. 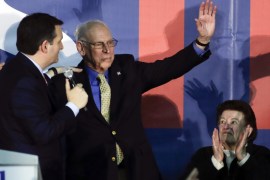 Ted Cruz: The most disliked man in Washington DC? 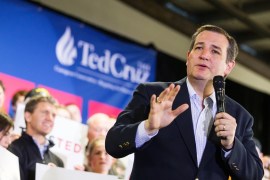 As Republican race tightens, former rivals join forces but it remains to be seen if Donald Trump can be challenged.