Israeli Prime Minister Benjamin Netanyahu has for the first time held his weekly cabinet meeting in the occupied Golan Heights, amid criticism from local Syrian activists.

Speaking in the Jewish-only settlement of Maaleh Gamla on Sunday, Netanyahu declared that the 70 percent of the Golan, which Israeli forces occupied during the 1967 Middle East war, will “always remain” under Israeli control.

“I convened this celebratory meeting in the Golan Heights to send a clear message: The Golan will always remain in Israel’s hands. Israel will never withdraw from the Golan Heights,” he said.

The move came on the 70th anniversary of Syria’s independence, marking the withdrawal of French colonial forces from the country in 1946.

Mais Ibrahim, a Syrian human rights activist from the Golan’s Majdal Shams, criticised the decision to hold the meeting there – but added that this did not come as a surprise.

“On the contrary, I’d be more surprised if Netanyahu did not mention the Golan on Syrian Independence Day,” she told Al Jazeera.

Netanyahu’s declaration comes at a time when Syria is engulfed in a civil war between Syrian President Bashar al-Assad’s government and opposition groups. Although it started as a largely unarmed uprising in March 2011, the United Nations estimates that more than 260,000 have been killed so far.

More than 131,000 Syrians – Christians, Muslims and Druze – were driven from the Golan when Israel occupied it 49 years ago, according to the Golan-based Al-Marsad Arab Human Rights Centre.

About 20,000 indigenous Syrian Arabs – mostly from the Druze religious community – live in six villages still standing in the occupied territory. Meanwhile, upwards of 21,000 Israeli settlers live in 33 Jewish-only settlements subsidised and protected by the Israeli government.

While local Syrians are split over the ongoing civil war, the vast majority oppose Israel’s occupation. They hold Israeli-issued travel documents, but most have rejected offers of Israeli citizenship and remain legally “stateless”.

Israel claimed to have annexed the territory in 1981, but the move was rejected by the international community, including the United Nations.

Syrian researcher and Golan-based analyst Salman Fakheraldeen accused Israel of attempting to “take advantage of the fact that Syria is a collapsing state”, referring to the ongoing civil war.

“But this doesn’t erase or cancel the rights of Syrians from the Golan,” he told Al Jazeera.

The Al-Marsad Arab Human Rights Centre has also accused the Israeli government of “a calculated effort to establish “facts on the ground” in order to solidify their illegal annexation of the Golan in the midst of a brutal and protracted conflict in Syria”.

Afek Oil and Gas, an Israeli company, has been granted exclusive licence to conduct exploratory drilling for oil in the southern Golan. Afek is a subsidiary of Genie Energy Limited, a New Jersey-based company for which former US Vice President Dick Cheney is an adviser.

Since the outbreak of the Syrian conflict, the Netanyahu government has also invested millions of dollars in Israeli settlements in the Golan.

Benedetta Berti, a security analyst and research fellow at the Tel Aviv-based Institute for National Security Studies, explained that the Netanyahu government views control of the Golan as essential to the country’s security.

Speaking to Al Jazeera, she said that Israel is monitoring the Syrian-controlled side closely for activity by Iranian troops and Hezbollah, the Lebanese armed group fighting alongside Assad.

“I think the Israeli security establishment still believes it is not in Israel’s interest to get directly involved in the internal battles between Assad and his opponents,” said Berti.

Nonetheless, she argued that big advances by pro-Assad forces could trigger “some type of Israeli ‘signalling’ operation”, like the killing of Samir Kantar, a former prisoner and high-profile Hezbollah fighter.

Kantar, who had served 29 years in Israeli prison, was killed in December by a suspected Israeli air strike in the Jaramana area of Damascus.

In Quneitra, situated in the side of Golan still controlled by Syria, media activist Abu Omar al-Jolani said Syrians are united in their opposition to Israel’s occupation of the territory.

“The Syrian people are enduring the worst stage of their history, being killed every day by the regime,” he told Al Jazeera by telephone.

“The most important thing is surviving, finding bread. But at the same time, that is my grandparents’ and parents’ land. The Golan is Syrian. The whole world knows this.” 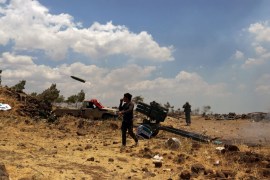 No group has taken credit for the car bombing, which killed the leader of Syria Revolutionaries Front and 17 others.