Nearly 250,000 people have been evacuated from their homes amid fears of further earthquakes as rescue officials continue their desperate search for survivors in the remains of buildings destroyed in Japan.

A 7.3-magnitude tremor struck early on Saturday morning, killing at least 32 people, injuring about a thousand more and causing widespread damage to houses, roads and bridges.

It was the second major quake to hit Kumamoto province on the island of Kyushu in just over 24 hours. The first, late on Thursday, killed nine people.

Rescuers on Sunday searched for dozens of people feared trapped or buried alive, while survivors queued for scarce supplies of food and water.

Factories for companies including Sony, Honda and Toyota halted production as they assessed damage in the region, an important manufacturing hub in Japan’s south.

In the village of Minamiaso, eight people remain “out of contact”, said public broadcaster NHK.

Rescuers pulled 10 students out of a collapsed university apartment in the town of Minamiaso on Saturday.

Overnight, rescuers digging with their bare hands dragged some elderly survivors, still in their pyjamas, out of the rubble and on to makeshift stretchers made of tatami mats.

“The Self Defence Force, police and firefighters have been working to rescue people but there are still missing people,” Shinzo Abe, the prime minister, said.

“The government will further deploy all possible means by expanding the troop size to 25,000.”

He said he had accepted an offer from the  United States of help with air transportation in the rescue efforts.

Heavy rains prompted worries of more landslides and with hundreds of aftershocks and fears of more quakes, thousands spent the night in evacuation centres.

The indiscriminate nature of the destruction saw some houses reduced to piles of splintered timber and smashed roof tiles while neighbouring homes were left standing.

About 422,000 households were without water and 100,000 without electricity, the government said.

NHK said around quarter of a million people had received evacuation orders across the affected region amid fears of landslides.

On the other side of the Pacific, Ecuador was also struggling with the aftermath of a major 7.8 quake which hit on Saturday, killing at least 77 people.

Both Japan and Ecuador are on the seismically active “ring of fire” around the Pacific Ocean. 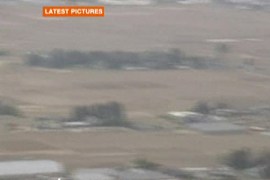 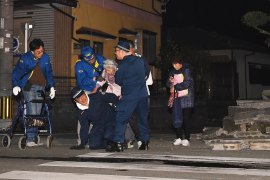 Week in pictures: From Japan quake to refugee crisis 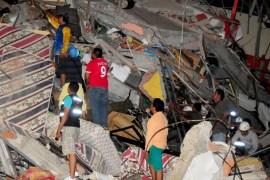