Bangladesh’s minister of law said on Sunday that the arrest of a prominent magazine editor for his suspected involvement in a conspiracy to kidnap and kill the son of the country’s prime minister was not politically motivated.

Shafik Rahman, 82, was arrested at his home on Saturday by men who originally identified themselves as journalists from a local television station who wanted to interview him.

Rahman is not formally a member of the opposition Bangladesh National Party (BNP), though he is closely associated with it and was recently appointed as the convenor of its international affairs committee.

His arrest comes less than a week after a report published by the International Crisis Group criticised Bangladesh’s criminal justice system for being “deeply politicised” and “dysfunctional”. It also claimed law enforcement authorities were concentrating their efforts on “targeting the opposition”, rather than curbing criminality.

But Law Minister Anisul Huq told Al Jazeera that Rahman’s arrest had nothing to do with politics.

“My question is whether someone who is a member of the opposition party should be immune from the legal system of this country?” Huq said. “If [a BNP member] commits an offence, is he to be exonerated?

“Here the investigating authority is saying that there is a specific case against Shafik Rahman,” he added. “It is necessary to look at whether there is enough material to support the allegation in this case – not whether he supports the BNP.”

Rahman was for many years the editor of the mass circular Bengali newspaper Jai jai Din but now edits a monthly magazine called Mouchake Dhil.

According to Rahman’s wife, members of the police’s detective branch entered their house early on Saturday pretending to be working for the private television company Boishakhi TV and seeking an interview with her husband.

“While my husband was getting ready, we gave the three men some tea and snacks downstairs,” said Taleya Rahman, who runs a non-governmental organisation, Democracy Watch.

“Then the men came upstairs and met my husband who was coming down for what he thought was to be a TV interview,” she added. “The men then told my husband that they were from the detective branch and forcibly took him away.”

The law minister said that he was unaware of the exact circumstances of the arrest. “Some others have mentioned this to me. I will have to look into that,” Huq said.

The conspiracy case was filed in August 2015 after Sajeeb Wazed, son of Prime Minister Sheikh Hasina, posted a Facebook message about a BNP activist who had pleaded guilty in the United States to paying for confidential FBI information concerning his financial affairs.

“The BNP had planned to kidnap me and kill me here in the US,” Wazed claimed in the message.

Taleya Rahman denied her husband had any involvement in the alleged crime. “I think he was arrested as the government thought he had provided information to the US state department for its report on human rights, which was published a few days ago.”

The media has been under increasing pressure in Bangladesh over recent months.

In February, ruling party activists filed 17 cases of sedition and 62 cases of criminal defamation against Mahfuz Anam, editor of the country’s leading English-language newspaper, after the prime minister’s son claimed – also in a Facebook post – that Anam had “admitted” publishing “false corruption stories” against his mother “in an attempt to remove” her from politics.

Anam’s paper the Daily Star along with its sister paper Prothom Alo have been subject to an unofficial advertising blockade since August 2015. 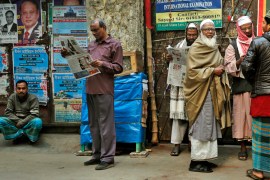