Iraqi politicians have voted to remove the parliamentary speaker, MPs say, amid a major row over the cabinet line-up that has caused chaos in parliament.

The office of parliament speaker Salim al-Juburi, one of the country’s leading Sunni Arab politicians, said the session was “unconstitutional and lacked the necessary quorum”.

But Niyazi Oghlu, the official responsible for taking roll at parliament, put the number of politicians present at 173 out of 328, while two MPs also said more than 170 attended.

The vote comes a day after a parliamentary session degenerated into a massive brawl with shoving, shouting, and water bottles thrown.

The chaotic scenes have been triggered by division over Prime Minister Haider al-Abadi’s efforts to replace the current cabinet.

Last month he presented to parliament a  list of new cabinet nominees  composed of independent technocrats.

The political blocs then put forward their own candidates, and under pressure, Abadi on Tuesday submitted a second list, based on party links.

Some MPs demanded the opportunity to vote on Abadi’s original list but the session was adjourned on Tuesday without a vote.

Dozens of politicians then began a sit-in and have remained in the parliament building, protesting at what they say are attempts by powerful factions to maintain control of posts in the proposed government.

Another session on Wednesday descended into mayhem after some polticianss were involved in scuffles over the government nominations.

Iraqi governments have been formed along political and sectarian lines since the United States-led 2003 invasion that deposed Saddam Hussein.

Street and political protests against this system, which critics say contributes to corruption, have been increasing in recent months.

Last summer, Abadi proposed a package of reforms amid pressure from the country’s politicians and religious leaders, but his rivals say few changes have since been implemented. 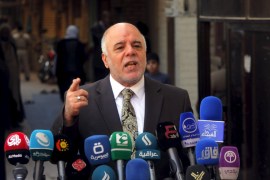 Haider al-Abadi’s list of nominees rejected by both Shia and Sunni politicians prompting parliament to draw to a halt. 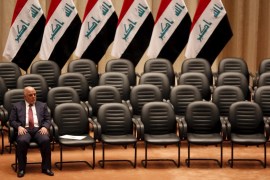 Iraq’s PM presented his new cabinet line-up to parliament, but political crisis is unlikely to go away.